He praised President Kenyatta and Raila for leading the efforts in restoring all the water towers in the country.

•The elders under the Maasai Unity Forum said remarks by DP in Narok — that evictees would not return — were meant to hoodwink the community to support him.

•Led by Maasai Council of Elders chairman Kelena ole Nchoe, they said the DP is not honest in conservation efforts and he is only pursuing his own interests. 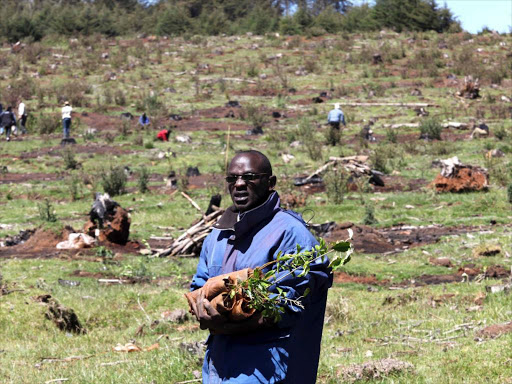 MAU DEGRADED: A man carries seedlings for planting at the Kaptunga station of the Mau Forest complex.
Image: FILE

Elders from the Maasai community have told Deputy President William Ruto to stop misleading Kenyans that he supports restoration of Mau forest.

The elders in the Maasai Unity Forum said the DP's recent remarks in Narok —that evictees would not return —were meant to hoodwink the community to support his presidential ambition.

Led by Maasai Council of Elders chairman Kelena ole Nchoe, they said the DP is not genuine about his commitment to conservation, only his own interests.

They commented during a meeting in Ololulunga town in Narok South  on Monday.

“We are wondering why DP has been silent for a long time on the conservation of the biggest water tower. He never uttered a word about his environmentalism when when we were fighting for the removal of illegal settlers from the forest,” Nchoe said.

He praised President Uhuru Kenyatta and ODM leader Raila Odinga for leading the efforts in restoring all water towers in the country.

“We thank these two leaders for their tireless efforts in protecting our forests, on which many livelihoods depend. People should stand up to preserve these vital towers," Nchoe said.

The chairman said the community will back Raila for presidency after he joined the head of state to unite the country.

“DP Ruto should know that the community has already settled on the former prime minister.We are aware he wants to use every means to win Maasai votes, including the Mau issue, but it's too late," he said.

During his visit to Narok last week, DP Ruto lashed out at politicians who criticise the evictions of illegal settlers and use the issue for political mileage.

Ruto said that Mau issue is a lost case as illegal settlers have been removed to pave way for the restoration of the country's biggest catchment area.

“Those who were in the forest illegally have been evicted and the government will not allow anyone to return to the forest. Those spreading rumours have missed the point," Ruto said.

He said leaders should not use Mau forest to drive a wedge between  communities living in Narok county but instead they should work together on how to conserve it.

Meanwhile, Nchoe has told unnamed politicians to stop imposing leaders on them, saying they have capacity to choose the leaders they want.

Nchoe said they will sit down with all the clans, tribes and agree on the best leaders who are capable of taking Narok to higher heights.

“It is totally unacceptable for these leaders to move around the county and dictate to us the leaders we should elect. The next county leadership will be inclusive of all the communities and we are not ready for a few politicians pushing  their own agenda,” Nchoe said.

Maasai Unity Forum chairman Seleila ole Mwanik said the community will play a key role in electing credible leaders to steer the county to economic prosperity in the general elections.

Mwanik said  the community has a duty to scrutinise every leader to get the best leaders without a tainted image.

Resettle evictees on equivalent land or give payout, otherwise, ICJ must decide.
News
1 month ago

Ruto lashes out at politicians over Mau Forest restoration

He dismissed the assertion that he opposed the reclamation of the Mau Forest.
News
2 months ago