Moi Referral services will not be affected despite looming strike

The facility's CEO Dr Aruasa says it has its own doctors and consultants along with other medics. 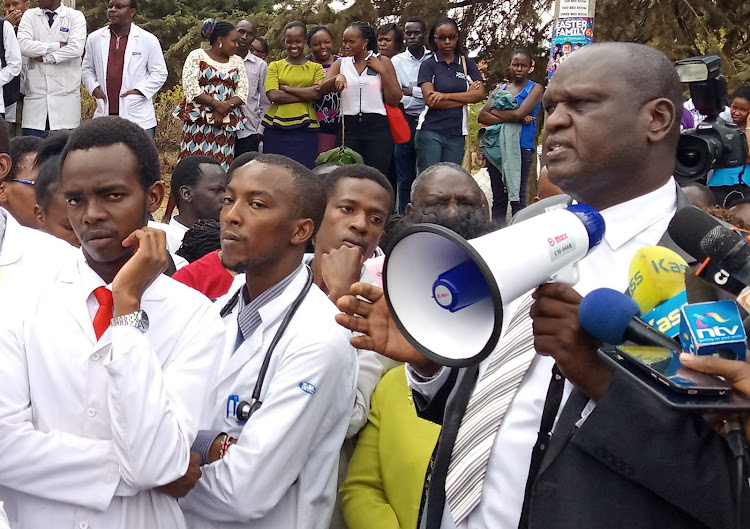 The Moi Teaching and Referral Hospital in Eldoret says its services will not be affected by a planned strike by doctors.

The doctors are employed as lecturers at the Moi University School of Medicine.

The hospital CEO Dr Wilson Aruasa said the facility has its own doctors, 120 in total, and consultants along with other medics.

He said the staff will continue with their usual services because they have no issue with the hospital.

The more than 150 doctors have insisted that they will go on strike starting next week.

They demand payment of enhanced salaries and call allowances withheld by the university for the last two years.

The doctors said the strike would also affect services at the hospital where they also offer medical services and train medical students.

He said although the hospital is not involved in the failure to pay the money, services will be affected.

Dr Atella said he has written to the EACC to investigate how money meant for doctors went missing at the university causing the current crisis.

Moi University VC Isaac Kosgey has promised to have the matter addressed urgently.

However, the doctors insist the strike will go on as planned unless the money is released to them immediately.

“The doctor-lecturers have agreed to proceed on industrial action because the university has refused to pay the money that was released more than two years ago,” Dr Atella said.

He said the medics had been blacklisted by financial institutions because deductions from their salaries were not being remitted by the universities.

Atella said all medical practitioners, specialists, pharmacists and all dentists would go on strike.

“They will not go back to work until their demands are fully met by the university. As a union we are looking at the welfare of our members which supersedes interests of the management.”

He said the Medical School was also facing a shortage of lecturers and an appeal to the university to employ more had failed hence the situation may affect quality of training.

KMPDU is demanding the hiring of more than 100 extra doctors to ensure medical training is not affected.