She commented while being received by DP William Ruto into UDA

• She said even with the backing of the President and state machinery, Raila will still be unable to scale Mt Kenya, calling that a pipe dream.

• On her falling out with the DP, Waruguru stated, “It was purely ideological and we have since resolved the issues." 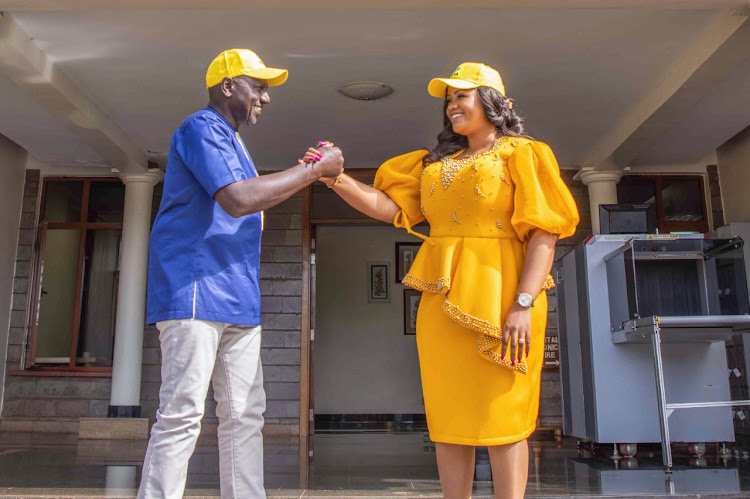 The main purpose of the surprise handshake was to prepare the way for ODM boss Raila Odinga to succeed President Uhuru Kenyatta, Laikipia Woman Representative Cate Waruguru has said.

She said it was intended to shove Deputy President William Ruto out of the way.

Waruguru was formally received back to the hustler movement by Deputy President William Ruto on Tuesday. He handed her a UDA cap and clasped her hand, then stood back and let her speak.

She said the Building Bridges Initiative had been used as camouflage of inclusivity to disguise the real intentions.

From where I sit now, it is clear the handshake was cover to give Raila an entry as somebody’s project for 2022.

BBI's primary role was to position the former Prime Minister as Uhuru’s successor in next year’s polls, she said.

In a later phone interview with the Star, the vocal legislator said BBI flopped because of how its initiators — the President and Raila — had mismanaged it

“I believe its (BBI's) failure lies squarely on the two senior principals and their legal advisers. From where I sit now, it is clear the handshake was cover to give Raila an entry as somebody’s project for 2022,” Waruguru said.

She said, however, she does not regret supporting BBI with the ultimate goal of amending the 2010 Constitution. The courts put the brakes on the BBI process, calling it unconstitutional, null and void.

She said BBI provisions such as fair sharing of revenue in line with population should be revised, adding that the people of Mt Kenya are getting a raw deal.

“I am on record saying BBI is now behind us and we must forge ahead as a country. I do not regret that it failed; rather, as a Kenyan it provided an opportunity for the growth of our democracy,” she said.

Waruguru added, “Like any other initiative, it had pros and cons and we all had the independence to read, comprehend and make informed decisions.”

She said even with the backing of the President and "state machinery", Raila will still be unable to climb Mt Kenya, saying reaching the summit will remain a pipe dream.

"Climbing the mountain entails a lot of aspects that Raila lacks,” cautioning the former PM’s marketers in the region to be honest with him about the obstacles.

“Does he have the energy and stamina to fight the chilly weather? Because that harsh experience is well told when one walks and doesn't fly to the peak.

"When he walks with the people, as in the case of William Ruto, [he has advantages], but [not] when he flies with travel agents, political brokers and rejects,  which is the case with Raila Odinga,” she said.

She said the people of Mt Kenya voted overwhelmingly for Jubilee in 2013 and twice in 2017. They were betrayed, however, by the President when he opted to shake hands with Raila, a situation that has made life "unbearable," she said..

"The question is why hasn’t Uhuru accompanied Raila in his quest to climb the mountain?" she asked.

On her disagreements with the DP, Waruguru said, "It was purely ideological and we have since resolved the issues."

She said she has "opened a new chapter" with Ruto and now will be leading his campaigns in Mt Kenya.

“I am a founding member of Tangatanga and once a member always a member. I was elected on a Jubilee ticket but as a party Jubilee has outlived its manifesto. Meanwhile, Tangatanga has grown as a movement that has birthed UDA,” she said.

Ruto and Waruguru, once close allies, parted ways last year at the height of BBI campaigns.

She said that from her research, Ruto’s United Democratic Alliance is the party of choice in Mt Kenya and the region has resolved to back him for president next year.

“The Laikipia county case study is that of the three constituencies, namely Laikipia East, Laikipia West and Laikipia North, it's vividly clear that William Ruto commands more than 85 per cent of the votes as of now.

"My people’s party of choice is UDA and I cannot take them on a path they don’t want. The people of Mt Kenya have beyond a reasonable doubt resolved to back Ruto for President,” Waruguru said.

She said she was convinced the Mt Kenya region will be safe under Ruto as he has been at the forefront championing and commissioning government and community-based projects in the region.

The Deputy President has always been available, accessible and willing to engage the people,respecting their views and opinions."We as he people of the mountain know what we want and not what is being offered by political brokers."

Waruguru said the war waged against Ruto and his allies in the ruling Jubilee Party was the beginning of its downfall. She accused party officials of causing the outfit to be disliked by its former supporters.

“The squabbles and infighting in Jubilee have left the people on the ground disappointed, their businesses have derailed, the economy is struggling and some signature projects have stalled," she said.

"We also have individuals who capitalised on the supremacy battles and the so-called handshake to loot in incidences that will go unrecorded,” she said.

Said that her decision was reached after numerous engagement with the locals.
News
9 months ago