Feed will help save animals that have not already migrated for water and pasture.

• Lonyangapuo said farmers in the subcounties have lost their livestock due to lack of pasture. and water.

• The entire county population is also facing starvation after the region experienced total crop failure after the last planting season. 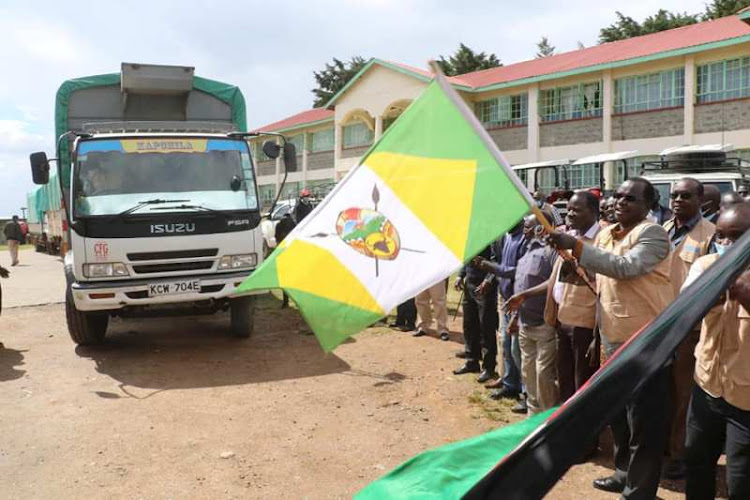 Livestock in West Pokot are getting Sh7.2 million feed to save them from starvation during the ongoing drought.

West Pokot and the UN Food and Agriculture Organization are distributing the free feed to drought-stricken households in Central and North Pokot subcounties.

The distribution includes 4,000 bags of livestock feed worth Sh7.2 million.

Speaking while flagging off the consignment, Governor John Lonyangapuo said the feed will help mitigate the effects of drought in the hardest hit area, where 90 per cent of animals have migrated.

Lonyangapuo said farmers in the subcounties have lost their livestock due to lack of pasture  and water.

The entire county population is also hungry and facing starvation after the region experienced total crop failure after the last planting season.

He said more than half of the entire population has run out of food supplies and most people are surviving on one meal per day.

“Residents of Kacheliba are now staring at starvation in the next few months,” he said.

The governor encouraged residents to plant maize to cushion them from hunger and to disregard those who are discouraging them.

“My government distributes free seeds every planting season. I urge residents to make use of the seeds since we don’t want people to depend on relief food,” he said.

West Pokot's national drought management coordinator Mike Kimithi said the hunger situation in the county is still in the "normal stage" and there is no cause for alarm.

Drought could extend to May next year - early warning report

USAID comes to the aid of 2,700 starving families in West Pokot

Some 750 households got Sh5,400 each in the last two months.
Counties
2 weeks ago