• The EACC has opened investigations into claims of graft in the VC’s office and existence of ghost workers. 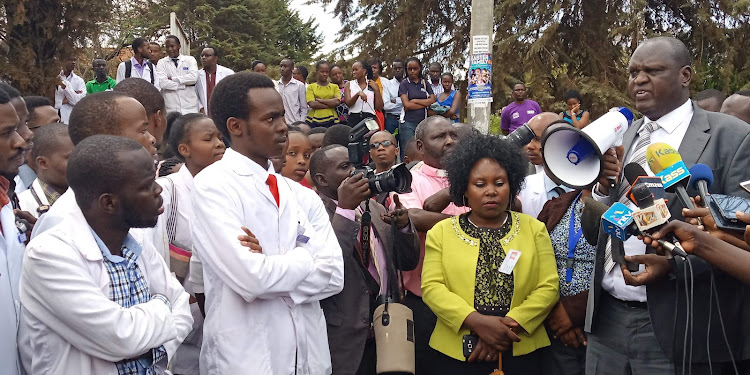 The financially crippled Moi University will reopen its main campus on Monday after nearly two weeks of closure due to a staff strike.

“At a special meeting held on November 3, the Senate resolved that teaching and learning activities should resume.

It is, however, not clear if the university management has reached a deal with the striking workers. Union officials are expected to issue a statement on Monday.

Lecturers and other staff went on strike demanding implementation of a delayed CBA and failure by the university to remit more than Sh2 billion statutory deductions.

Lecturers at the institution said it was on its death bed with almost all operations paralysed due to financial problems caused by a bloated workforce and corruption.

The EACC has opened investigations into claims of graft in the VC’s office and the existence of ghost workers.

The VC, however, denied claims that the university had been ignoring the plight of its workers.

He said they had started reducing the accumulated statutory deductions and obligations with financial institutions so that workers access the support they need.

Kosgey said the college had no backlog in payments of salaries except wages for some casual workers.

He asked workers to be patient as their grievances are addressed.

However, the chairman of the university council Humphrey Njuguna who was accompanied by Vice Chancellor Kosgey said the university had no money to implement a new CBA for the workers unless the state intervenes.

“In the current position, we can't pay and we won’t pay,” the chairman said.

The chairman has been frequenting the institution to guide the process of its revival.

He said the university will send home more than half of its 5,000 workers, in a staff rationalisation programme caused by deep financial problems including debts amounting to more than Sh5 billion.

The university is also considering increasing fees from the current Sh16,000 yearly because the money is unable to sustain operations.

Njuguna said the crisis at the college was caused by a bloated workforce after the number of its students reduced from about 60,000 to less than 27,000, following closure of the parallel degree programmes three years ago.

The chairman said the university had decided to take tough measures including retrenchments, closure of satellite campuses and outsourcing some of its services in cost cutting measures.

“We have to discus with parents and other stakeholders including the Ministry of Education because there are facts we cannot avoid like the need to increase fees.  This has to be achieved through public participation as required by law,” he said.

Njuguna said the collapse of the parallel degree programme also known as the self-sponsored students programme and closure of some campuses caused the university to lose Sh5 billion in internal revenue, yet the number of staff had remained the same.

“We therefore have to sack some of the employees and implement other measures to help us make some revenue,” he said.

The chairman said the council has unveiled a plan to save the university from collapse through income generating activities to supplement dwindling state funding.

The university will use more than 1,000 acres of its land to produce apples on large scale in a venture that will generate more than Sh80 billion in four years. The project is ongoing.

“We have done due diligence and through research involving the school of agriculture, we are sure we will succeed and revamp the university fully,” Njuguna said.

Post a comment
WATCH: The latest videos from the Star
by BY MATHEWS NDANYI
Rift Valley
07 November 2021 - 09:51
Read The E-Paper