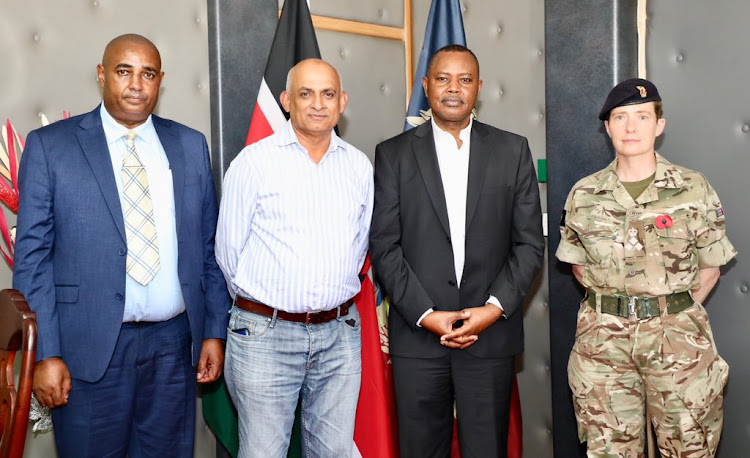 A team of Kenya and UK detectives has begun fresh investigations into the 2012 murder of Agnes Wanjiru by a British soldier.

The team was announced on Friday during a meeting between Director of Criminal Investigations George Kinoti and Defence Advisor to the British High Commission Brigadier Ronnie Westerman.

The resolution was arrived at after close to two hours of comparing notes and laying the groundwork for the probe.

A homicide team, led by Martin Nyuguto, is expected to travel to the United Kingdom where, jointly with the British National Crime Agency, they will interrogate and identify suspects and witnesses.

The team is not only going for the low-ranking soldiers alleged to have been present on the night of Wanjiru’s murder but also high-ranking officials said to have conspired to keep the killing under wraps.

Kinoti's office has requested for a joint investigation with British officers.
News
1 year ago

A public inquest into Wanjiru’s murder by principal magistrate Njeri Thuku in 2019 revealed that she was killed by a British soldier training in Kenya.

Kinoti said the inquiry file was forwarded to his office to tighten the case to nail the suspect. After receiving the file, the sleuths established contact with the UK government regarding the case.

Kinoti said his office requested joint investigations, noting that the British officers were back in the UK.

“So far, the Officer Commanding Major Inquiry Team and Major Incident Room, Special Investigations Branch Regiment, Royal Military Police of the United Kingdom has been collaborating very well with DCI’s homicide experts regarding investigations into the case,” he said.

The body of the 21-year-old woman was found in a tank at Lion’s Court Hotel in Nanyuki two months after she was reported missing in March 2012.

Although her family had given up on finding justice, the latest pressure to bring to book the perpetrator of the crime has given them renewed hope that justice will finally be served.

Wanjiru’s murder case shot back into the limelight when her alleged killer visited Kenya and posted a picture of him in front of Lion’s Court Hotel.

Soldiers present on the night of the murder are reported to have taken to the comment section, making fun of Wanjiru’s death, which prompted one of them to lift the lid in a confession.

Last Wednesday, UK Armed Forces Minister James Heappey said during his visit to Nanyuki that the UK would fully collaborate with the Kenyan authorities to bring the culprits to book.

“If there are further allegations that come to the light, absolutely no stone will be left unturned in making sure that we provide all the information necessary for the Kenyan authorities to investigate those claims,” Heappey said.

He said the UK had nothing to hide as far as Wanjiru’s death was concerned and it was their hope the case be dealt with as quickly as possible.

“We want those responsible to be brought to justice because Agnes and her family have already waited too long for these cases to be resolved. We need that now to be investigated and brought to court in Kenya.”

The minister, however, said he would not commit to the extradition of the two soldiers being investigated.