• We would rather miss job opportunities created by the British Army Training Unit in Kenya rather than lose our people through murder, Laikipia governor said.

• Muriithi said it is the number one responsibility of any government or state to protect lives of its people. 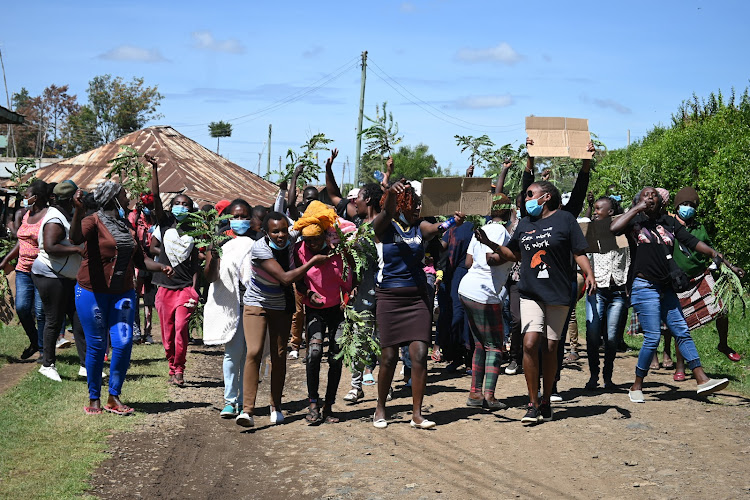 Laikipia Governor Ndiritu Muriithi has condemned the killing of Agnes Wajiru, 21, allegedly by a British army soldier in Nanyuki in 2012.

Nothing can justify the murder of an innocent civilian by a foreigner, or anyone, he told the media on Monday at his office in Nanyuki.

"We would rather miss those economic and job opportunities supposedly created by the British Army Training Unit in Kenya rather than lose our people through murder," the governor said.

Muriithi said it is the primary responsibility of every government and state protect the lives of its people.

“No defence pact gives foreign soldiers a license to kill local citizens and anyone negotiating such an agreement is ill-advised," Muriithi said.

The governor said if prosecuting foreign soldiers for crimes committed in Kenya would threaten the defence pact between Kenya and United Kingdom, that pact would not hold water.

Muriithi said the county government had on Thursday last week lodged an official demand for action with the Directorate of Criminal Investigation over the murder of Wanjiru.

He praised Inspector General of police Hillary Mutyambai’s commitment to get to the bottom of murder. On Monday, Mutyambai ordered reopening of the murder investigation.

Muriithi said he hoped the National Police Service realises why everybody was extremely concerned at the slow pace of getting justice for the murder victim and her family.

“The inquest was concluded two years ago and this murder case has been a subject of widespread discussion locally and globally,” Muriithi noted.

Muriithi reiterated the fact the British presence boosts the Laikipia economy must not mean the wheels of justice grind slowly or not at all.

"Their creating job does not give them licence to kill black people. Such atrocities were meted out during colonial times," the governor said.

The body of Wanjiru, who at the time was 21, was found in a septic tank.
News
1 year ago

The body of Wanjiru, who at the time was 21, was found in a septic tank.
News
1 year ago

Soldier X denied saying "there’s nothing you can do when you’re in the military."
News
1 year ago

This comes after a British newspaper published details of a BATUK soldier who allegedly killed Agnes Wanjiru .
R.Valley - Page 30
1 year ago
Post a comment
WATCH: The latest videos from the Star
by ELIUD WAITHAKA
Rift Valley
02 November 2021 - 22:00
Read The E-Paper