Raila hits out at Ruto over donations, pledges to seal graft loopholes if elected 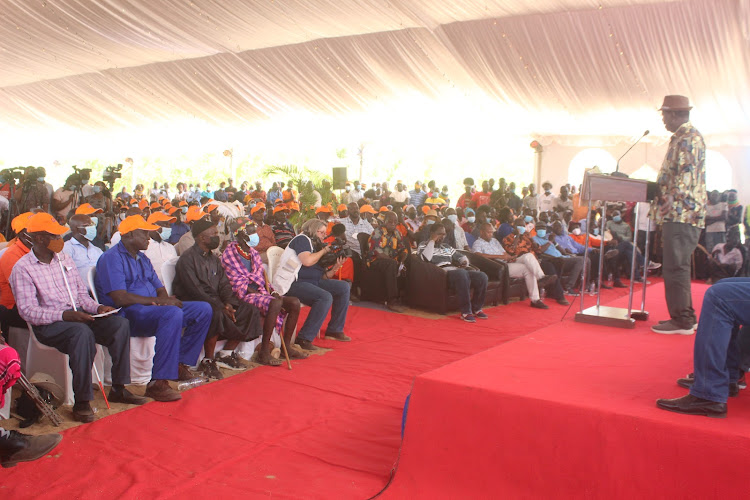 ODM leader Raila Odinga has said he will seal all loopholes of corruption if elected president in 2022.

He said the biggest problem affecting Kenya is corruption.

"I'm ready to declare my interest for the presidential bid, if people say yes," he said.

"The biggest problem affecting Kenya is corruption. People have embezzled public funds. When they got to the government they were thinner, but now they are fat like a tick."

In what appeared to be a veiled attack against Deputy President William Ruto, Raila said those who have stolen the public funds are giving out handouts to churches and "moving from county to county with sacks of money".

"Every month he's giving handouts of Sh100million. Yet we know that his earnings are about Sh3million. Where is he’s getting the money?... loopholes are sealed," he said.

He said his government will seal all loopholes of corruption and use the public funds for development.

"We want to reduce the cost of the living by reviving all the stalled and collapsed industries. We also need farmers to benefit from their farm produce."

"The price of maize in Kenya is very high, the cost of a bag Sh2, 500 while in Uganda its Sh1, 500, the price of milk and eggs are also lower in Uganda compared to Kenya," he said.

Raila said his government will ensure the cost of electricity is reduced, improve the agricultural sector and education for the economic recovery.

He reiterated plans to disburse Sh6, 000 to vulnerable families; a statement that has been criticised on feasibility.

“I want to tell them that experts have reviewed and it’s possible for every family to get that Sh6, 000 every month. We want to move to a cash transfer programme so that we can revive the economy,” he said.

Turkana delegates were led by Cabinet secretary for Petroleum and Mining John Munyes, Jeremiah Lomurkai MP for Loima and other leaders.