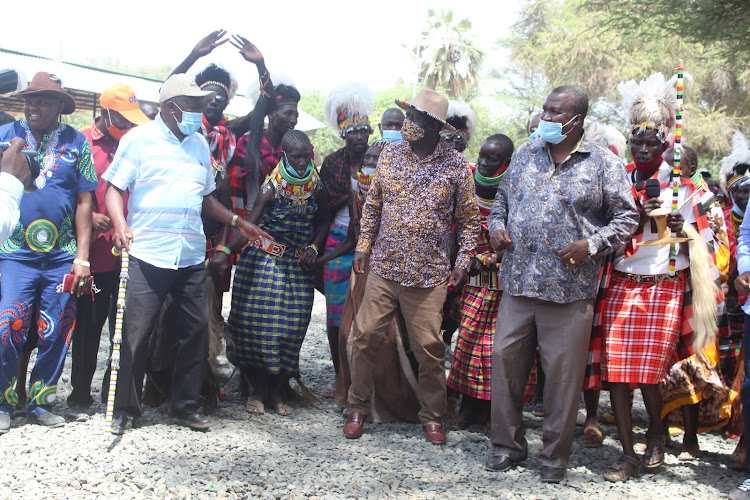 Residents of Turkana want ODM leader Raila Odinga to address the issue of oil exploration during his visit scheduled for Thursday.

They want to know why they haven’t benefited from the oil proceeds in Lokichar oil basin yet oil was tested and found to be marketable.

They said if Raila wants their votes, he should first tell them how under his government they will benefit from the oil explorations.

Residents said they had hoped the oil discovery in Turkana would change their lives for the better yet they have been faced with the cycle of drought, hunger, floods, poverty and underdevelopment.

Raila is expected to popularise his presidential bid in Turkana county on Thursday where most of his allies led by Governor Josphat Nanok have since decamped to Deputy President William Ruto’s UDA party.

Shadrack Ekitela, a resident of Lokichar, said since Raila is a close ally of President Uhuru Kenyatta, he should tell residents why they are facing tough economic times yet they have resources such oil.

“Our oil was tested and found out to be marketable. Why are we not benefiting from it? If Raila wants us to vote for him as the president, then he should first tell us how we are going to benefit from oil exploration in Turkana,” he said.

Ekitela said when oil was discovered in 2012, they hoped it would improve their living standards but that is yet to happen.

In August 2019, Kenya’s dream to join the league of petroleum exporting countries became a reality as the first consignment of Kenya crude oil under the Early Oil Production Scheme left the port of Mombasa.

The consignment of 200,000 barrels from Kenya’s oil fields in Turkana county destined for the United Kingdom was worth Sh1.2 billion, a price higher than what was initially projected.

James EJore, a resident of Lodwar, said residents have not had any further communication on oil exploration and they hope Raila will explain to them what the government is planning.

“We want Raila to explain to us what the government intends to don with our oil since it was tested and found to be good. Why are we not benefiting from oil proceeds?” he said.

Turkana Central taxi operators chairman John Emuria said they are unable to make ends meet due to the increase in fuel prices.

“We didn’t expect the price of fuel to shoot up like this. Some drivers have already returned the cars to the owners because they are unable to fuel the vehicles,” he said.

“When the new prices of fuel were announced, Raila said the price of fuel will go down this week. But nothing has happened,” he added.

A spot check by the star on Monday in Lodwar showed petrol retailed at Sh140 per litre but other fuel stations sold at Sh150 per litre.

According Petroleum and Mining CS John Munyes, oil exploration in Turkana is still on course.

Munyes said the government and partners are committed to getting enough oil in Turkana for commercialisation.

“We are trying to look for funds for the construction of the pipeline and soon we will get a partner to build the pipeline from Turkana to Lamu with all accessories to transport oil.”

“It’s not an easy task, with the support of Africa oil and Tullow oil, we want to try more than 300 wells of oil in Turkana North and Central to see if we can get enough oil for commercialisation purposes,” he said.

In February, Munyes said the government needed Sh500 billion for the infrastructure to enable transportation of oil from Turkana to Lamu.

A development update report seen by the Star indicates Africa Oil and its Joint Venture Partners plan to submit a finalised FDP by year end in line with license extension requirements provided by the Kenyan government last December.

"Based on the revised plan, Africa Oil believes that this project is an attractive commercial prospect for investors looking to access the East Africa oil and gas sector in both the upstream and midstream," the oil firm said in a statement.