Authorities says 640,000 people in the county are in dire need of food 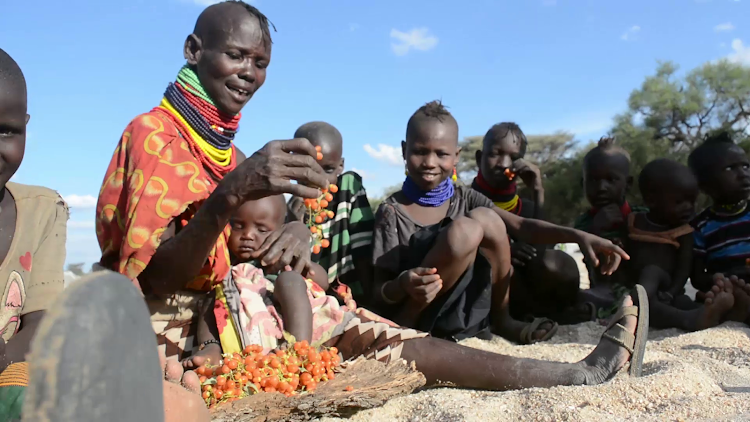 DROUGHT Ayanae Erukudi, a resident of Lokapel village in Turkana South, eats wild fruits (Edome) with her children to cushion them from hunger.
Image: HESBORN ETYANG

Residents of drought-stricken Lokapel village in Turkana South are surviving on wild fruits amid worsening drought in the region.

The starving residents said the region has been severely hit by drought that has caused nearby water sources to dry up.

There is no adequate pasture for livestock.

Residents said they normally depend on relief food from the government, non-governmental organisations and well-wishers for survival but since last year, they have not received any donations.

Turkana county authorities said more than 640,000 people are in dire need of food as the drought persists.

Ayanae Erukudi, a resident of Lokapel, said due to the drought, she has been forced to camp in bushes to look for wild fruits to eat with her children.

“Since last year, we have been experiencing drought in the region. But now it’s getting worse. All our water sources and pastures for livestock that we depend on have dried up,” she said.

“The animals that we depend on to support our livelihoods have been emaciated and some have even died. We appeal for the government and other humanitarian agencies to supply food donation to us,” she added.

She said most residents are forced to camp in the bushes to look for wild fruits.

“We look for wild fruits known as ‘edome’ in the bushes so that we can prevent hunger pangs. The fruits are bitter but at the moment we have no otherwise,” she said.

Esther Etabo, another resident of Lokapel, said they have not received relief food from the government and humanitarian agencies.

The Kenya Red Cross, in collaboration with USAID’s Bureau for Humanitarian Assistance (BHA) and Turkana county government, have launched a cash transfer programme to cushion residents from the effects of drought.

The USAID-funded programme targets 11,082 households, which is equivalent to 66,492 people in Turkana, Baringo and West Pokot counties.

Red Cross deputy secretary-general Annette Msabeni said the programme will benefit 5,323 families, which is equivalent to 31,940 residents in Turkana.

She spoke last week in Lodwar while launching the cash transfer programme.

She said Sh200 million has been disbursed for the cash transfer programme to assist the affected families.

“We have joined together with other partners to cushion the residents from effects of drought and hunger. We are aware that the entire county is affected but we are trying to reach the hardest to reach regions,” she said.

She said they are targeting residents from Turkana North, Turkana South and Turkana East subcounties in the cash transfer programme.

She said they will also be targeting households with malnourished children, the chronically ill, those who are bedridden, widows, widowers and people living with disabilities.

The programme will also benefit residents of Baringo and West Pokot.

“Pokot Central in West Pokot county and Tiaty in Baringo county which are among areas less covered by other actors due to access constraints related to insecurity and logistical requirements needed to access these areas will also benefit.”

Msabeni said they prefer cash transfer as opposed to in-kind food distribution since it is economically cheap to implement. She said the programme also helps to build the local economy by injecting much-needed cash in areas where the markets are still functional.

Turkana county secretary Peter Eripete who graced the launch of the programme appreciated the support to complement the county’s drought response.

“Each household will receive sh 5,067 per month for a period of three months, which represents 50 per cent of the Minimum Food Basket per household of six members. The action will be implemented for five months from September 1, 2021 to January 31, 2022,” he said.

He said more than 100,000 families affected by the ongoing drought will benefit from relief food courtesy of a joint effort by the county government of Turkana and the National Drought Management Authority.

“The exercise is a deliberate effort to cushion the families from the biting effects of drought following the activation of red alert by the national government on September 8, 2021,” he said.

He added that they are targeting 640,366 individuals, which is slightly more than 6o per cent of the county’s population. The exercise is expected to run until all the affected households are reached.

Eripete said the county government has spent Sh300 million to procure food that will lessen the impacts of the drought.