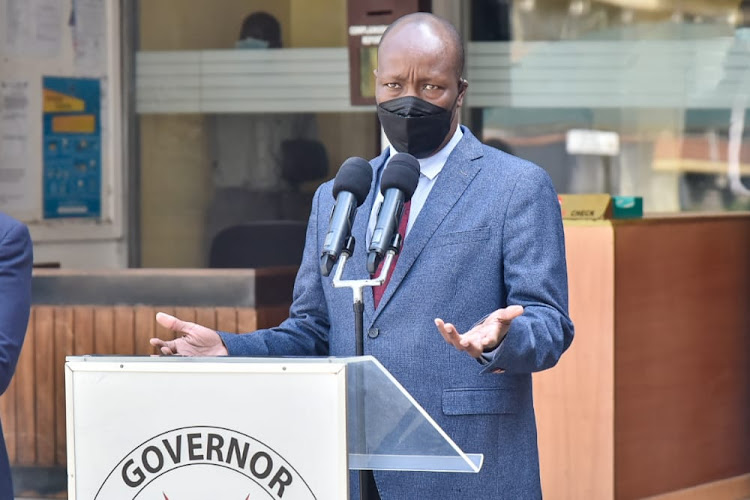 He would thenrun for reelection on a UPF ticket.

The governor was also installed as a Luo elder during a colourful event on Tuesday evening at the Nakuru County Government Annex at Milimani Estate.

The governor said Kenya has a major problem of greed across all political parties, saying it must stop.

He said society has become selfish as people seek public office not to serve the people, but for crass reasons, power and money.

For the first time, he made clear his association with the newly branded UPF, formerly the Citizens Convention Party. He said after reflections, he has considered the new  outfit.

Kinyanjui has been expected to support former Prime Minister Raila Odinga for President and bring him UPF votes.

He said he was inspired by the South African concept of Ubuntu. He said it means "I am because of you, it is a brotherhood."

“It is time to return humanity into politics. Leaders have completely forgotten why they got into office and in the coming days, we explain the Ubuntu principle,” he said.

Kinyanjui said the country had turned into a man-eat-man society. He repeated that Kenyans must decide if they want leaders who think only of themselves, their cartels and their financial targets.

“This must change as we go towards the next general election,” the governor said.

He was joined by Nakuru County Assembly Speaker Samuel Tonui, members of the Luo Council of Elders and other leaders.

It is vain to become rich in a society of poor people who cannot support themselves, so leaders must ensure better livelihoods for everyone, the governor said.

Kinyanjui is among the Mt Kenya region governors who have declared they will back ODM leader Raila Odinga for president.

When he was installed as a Luo elder, Kinyanjui said the most important thing is to ensure a peaceful election regardless of party affiliation or political opinions.

“The more I consider the 2022 polls, the more I remember the 2002 moment when the whole country came together to change a regime. The nation came together and sang, 'It is ubwogable' (unbeatable)," the governor said.

He said the desired shift was not for one or two communities and urged all Kenyans to join hands and seek what is best for the whole country.

it is these parties that will become the eventual kingmakers in the treacherous game of Kenyan politics.
Opinion
2 weeks ago

Your zip is down, Kinyanjui tells Kihika in church

Governor and Senator's rivalry plays out in front of DP Ruto in church.
Counties
3 months ago
by LOISE MACHARIA
Rift Valley
06 October 2021 - 22:00