The last time such a train was seen is 15 years ago. now rehabilitated.

•Metre-gauge connects freight and passengers with the Standard Gauge Railway that ends in Naivasha near Inland Container Depot.

• Kenya rehabilitated the old metre-gauge that will run to Kisumu. Open soon. 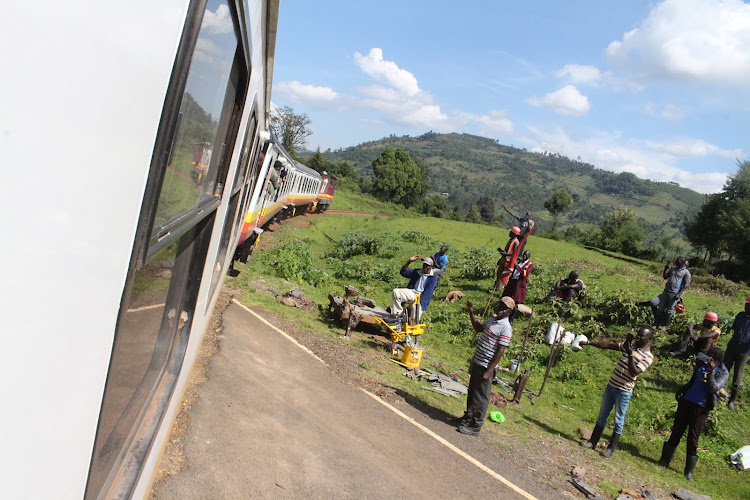 The once-sleepy villages from Nakuru to Kisumu on Saturday awakened to a roaring train following the renovation of the metre-gauge railway line.

Birds squawked and took flight, animals were startled and thrilled residents thronged the line to take pictures and cheer.

Children as young as age six dotted the lone, cheering and singing the praises of the new diesel-powered train.

The last time such a train roared past was 15 years ago. This was a trial run; the opening date was not immediately known.

The old metre-gauge had been neglected and more than five kilometres were vandalised.

Culverts were broken and swathes of land belonging to the Kenya Railways Corporation were grabbed by private developers. Now they have been recovered and fenced off.

After eight months of work, the Sh2.8 billioncargo and passenger train will connect the SGR that originally was to run to Kisumu. Instead it stopped in Mai Mahiu in Narok.

Now the metre-gauge completes the journey to Kisumu in eight hours.

“We will have a capacity of 1,000 passengers in eight coaches per trip,” Mainga said.

The MD said the train will open up the Lakeside region for water transport to other countries such as Uganda.

Mainga commented over the weekend,  accompanied by the National Assembly's Finance and National Planning Committees which have been oversighting the railway.

All financial investments by the government are oversighted by the committee to ensure value for money. 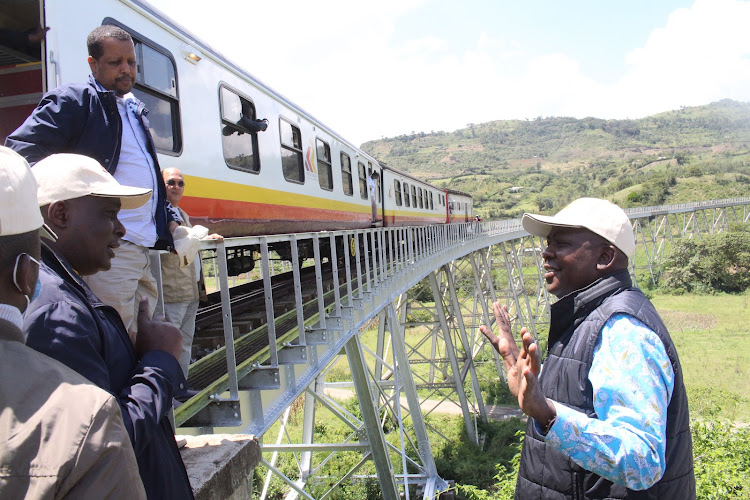 During the tour that started in Nairobi, committee chair Gladys Wanga and vice -chair Ndirangu Waihenya were onboard.

Wanga, Waihenya and Kandie did not take part in the whole trip due to other engagements.

Mainga said the lakeside region is strategic with industries dealing with grains such as wheat and maize.

“Input for agriculture will also be transported through the line,” he said.

Mainga said iron and steel  were also in demand in Kisumu.

Molasses for sugar industries and petroleum products also are in high demand.

He said the cost of doing business had risen because the old metre-guage line collapsed.

Some sugar companies in Lakeside had been connected to the line.

The final phase to Kisumu was to cost Sh380 billion.

However, the government failed to secure funds from China for the final phase, so authorities rehabilitated the metre-gauge.

Mainga said Sh2.8 billion will be used to rehabilitate the line adding that local labour was used.

The government had announced that phase 2B of the SGR project was to start at the Naivasha Industrial Park where Phase 2A ends.

It was to pass through Narok, Bomet, Kericho counties and terminate in Kisumu.

In the newly refurbished Nakuru-Kisumu route, a 1978 locomotive has also been refurbished.

The Longonot to Malaba line is 465Km while the Nakuru-Kisumu is 216.7km long.

Mainga said the first class with a number of carriages has  accommodation facilities, communications and other amenities. It's ready to go.

The line from Nakuru to Kisumu links the Rift Valley and Western Kenya regions with Uganda.

This means cargo will be moved from Mombasa to Kisumu and Malaba via rail.

From the Port of Mombasa, cargo will be transported aboard the Madaraka Express Freight Service trains up to the Naivasha Inland Container Depot.

“The cargo will be loaded onto the meter-gauge railway trains for onward transportation to Malaba and Kisumu.

Passengers on board the SGR will also be moved to MGR.

The track s used by SGR is 1.35 meters wide while those for the MGR is one meter.

The refurbished locomotive that will be running from Nakuru to Kisumu can go for another 25 years, Mainga said.

Mainga said it has a maximum speed of 80 kilometers per hour.

It also has music system, communication gadgets among other amenities.

Mainga said the rehabilitation that has been undertaken will not only enhance efficiency of moving goods but also passengers.

“Goods and passengers will seamlessly be transferred from SGR to MGR,” Mainga said.

The MD said the Corporation has approached Uganda to ensure that the 250 kilometers line from Malaba to Kampala is rehabilitated to the same standard as the one in Kenya.

“Uganda must look at it critically to avoid congestion at Malaba border,” Mainga said.

Mainga said goods from Mombasa were taking 10 hours to reach Mai Mahiu and 18 hours to Malaba.

The MD assured Kenyans that the integration of standard gauge and meter gauge railway will be seamless.

Mainga made the assurance when the Departmental Committee on Finance and National Planning of National Assembly toured the project.

The Committee that was led by Committee chairperson Gladys Wanga rode SGR up to Mai Mahiu before touring Longonot.

Mainga said goods and passengers using SGR will be ushered into MGR.

He said the ongoing rehabilitation of the Meter Gauge Railway along Mai Mahiu and Longonot is expected to be completed by September 30.

The testing by the contractor is expected by September 26, Mainga said.

Mainga said once testing has been done, the line will be certified before becoming operational.

The MD said the Corporation has acquired a numerical machine that is being used to produce nuts and bolts that will be used to maintain the line.

He said his organization will partner with local steel producers to make sure that the line is maintained.

At the Inland Container terminal, the committee was concerned that the facility was being under-utilised.

So far, the facility which has the capacity to handle 4,000 TEUs has handled only 10,000 since its inception.

The facility is on over 1,000 acres and can load two million tonnes of cargo every year. Most of the cargo is destined to Uganda, Rwanda, South Sudan, Ethiopia, Burundi and the Democratic Republic of Congo.

The dry port is intended to reduce congestion at the Nairobi ICD and Mombasa port, cut the number of trucks on the roads and facilitate seamless trans-shipment of goods to neighboring countries.

Kandie said the line has a lot of potential.

He said the investments made by the government so far are not meant to make profit but stimulate economic growth.

Shabbir on his part said there is no country in the world that has made profits by investing in railway.

“They see social cost and social development,” he said.

At the Nakuru station which has 400 meters platform, renovations are ongoing.

The station will have first class cafeteria and shops.

At least 18 other stations have been fenced to keep off private developers.

A total of 27 viaducts have been rehabilitated by engineers from the Kenya Railways.

Nyenze lauded the corporation for using the local manpower to repair the line.

In some sections of the line, KDF and NYS are among those who provided labour.

The state started reviving the lines after the much-touted standard gauge railway failed to reach its destination.
News
9 months ago

Cargo movement from Mai Mahiu–Malaba to start in November