Raila says many Kenyans are poor because resources are hijacked by a few individuals.

• Raila said corruption is a cancer that has eaten Kenya to its core, with politicians going to the government with the sole purpose of enriching themselves.

• Kinyanjui said no economic model being propagated by different presidential candidates can work unless corruption is eliminated. 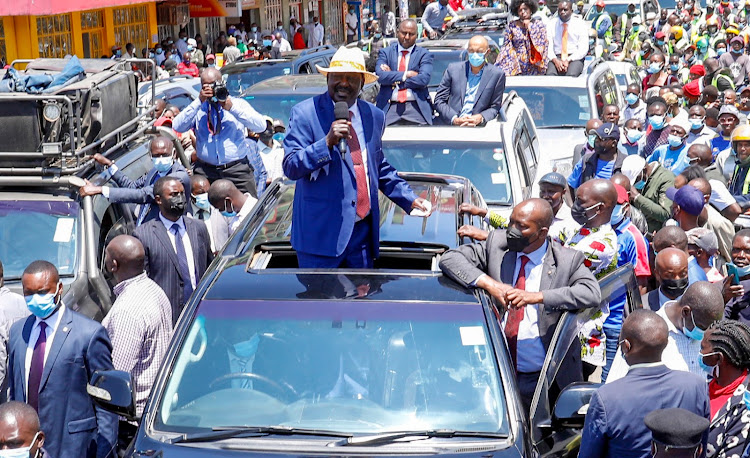 Corruption and the politics of tokenism are the major enemies of development in the country, ODM leader Raila Odinga and Nakuru Governor Lee Kinyanjui have said.

Raila said corruption is a cancer that has eaten Kenya to its core, with politicians going to the government with the sole purpose of enriching themselves.

The ODM chief said leaders have failed to show Kenyans the way to the 'promised land'.

He spoke on Tuesday during the burial of David Kibera Muchai, one of the pioneers of Mololine services in Elburgon, Nakuru county.

Raila said many Kenyans remain poor because the resources that are supposed to reach them and change their lives are hijacked by a few individuals.

“The founders of our nation wanted us to be like the land of plenty, as envisaged in our National Anthem, 'plenty be found within our borders'. This plenty was to come from our hard work as Kenyans,” Raila said.

“But almost 60 years since we gained Independence, we still have poverty, diseases, and ignorance amidst our people because we did not follow what the founders of our nation wanted.”

This, according to Raila, has mainly been brought about by leaders not giving enough opportunities to citizens so that every Kenyan child is assured of education and healthcare.

“We have not given our people enough opportunities, and this is why we need to change how we do things. We must make sure that every child that is born in Kenya, parents with money or without money, that child is assured of education and quality healthcare,” he added.

Raila accused some leaders and politicians of stealing from public coffers and throwing small tokens at people instead of giving people solutions to their problems.

Kinyanjui said no economic model being propagated by different presidential candidates can work unless corruption is eliminated.

He gave an example of Elburgon town which thrived because of timber business, but because of corruption, the town is now a shadow of its former self.

“We had a timber industry here in Elburgon. This town thrived because of it, but because of corruption, businesspeople could buy, for example an acre to harvest timber, but would end up harvesting 100 acres. Today, there are no trees left," Kinyanjui said.

“So the first thing we must address is corruption, with corruption, there is nothing that can work in Kenya and no economic model being touted by different factions will work.”

Kinyanjui also said the pyrethrum sector and the Kenya Farmers Association, among others, were killed by corrupt leaders, leaving farmers in absolute poverty.

Raila, who has visited Nakuru twice in two months, has made inroads into the county and seems to be enjoying substantial backing from leaders in the area, including Kinyanjui.

The governor declared that he will give his vote to the former prime minister in next year's presidential race.