Calls for ceasefire from both camps as demands for reconciliation continues.

• He observed that patriotism demanded leaders to always give priority to national interests whenever there was a conflict with personal interests.

• Kinyanjui urged politicians to recognise that there was a government in place to run the country until the next General Elections in 2022. 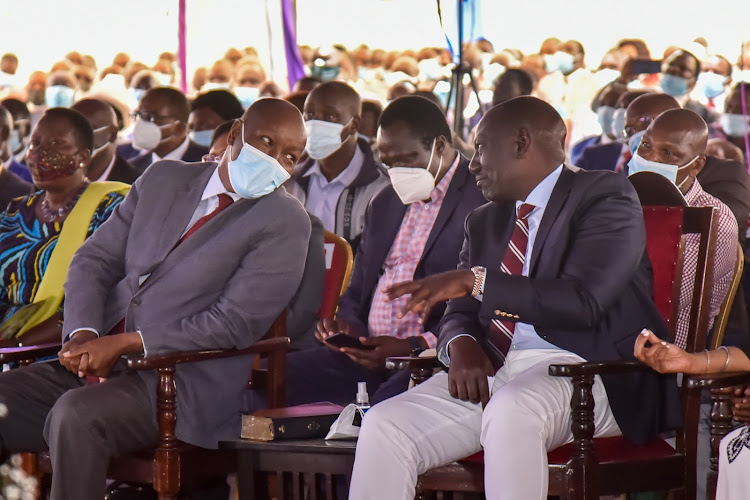 The call for reconciliation between President Kenyatta and his deputy William Ruto is a welcome gesture that deserves the total support of all well-meaning Kenyans, Nakuru Governor Lee Kinyanjui has said.

He, however, said the call was unlikely to achieve much with the vitriol from supporters of the two factions.

“While intentions of the Catholic Bishops’ were noble, junior politicians seeking relevance through insults and cheap propaganda will not want a ceasefire,” said Kinyanjui.

The governor said junior politicians who travel from one county to the other spilling vitriol make a living out of the conflict.

“This clique can be best described as ‘beneficiaries of the conflict’ and it will never want a ceasefire because they will go hungry."

There have been constant attacks and counter attacked between two groups of the ruling Jubilee Party with the Kieleweke faction supporting President Kenyatta while Tanga Tanga is affiliated to DP Ruto.

Kinyanjui urged politicians to recognise that there was a government in place to run the country until the next General Elections in 2022.

On Wednesday, the Kenya Conference of Catholic Bishops urged President Kenyatta and DP Ruto, to reconcile saying that their feud was likely to cause political violence.

Today, Kinyanjui said unity was of critical importance for the government to achieve its goals among them the Big Four Agendas namely ensuring food security, affordable housing, manufacturing, and affordable healthcare.

“Even when we embrace different political ideologies and interests, there is a need to isolate national interests from personal interests,” he said.

He observed that patriotism demanded leaders to always give priority to national interests whenever there was a conflict with personal interests.

“The initiative to tone down the political temperatures and create a conducive environment to conduct the next elections should be supported by all,” he added.

He noted that the next president will be for all Kenyans including those who will not have voted for him.