Kangogo's parents hand over her children to their father

Ng'eno is a senior cop attached to the Maritime Police Unit based in Mombasa. 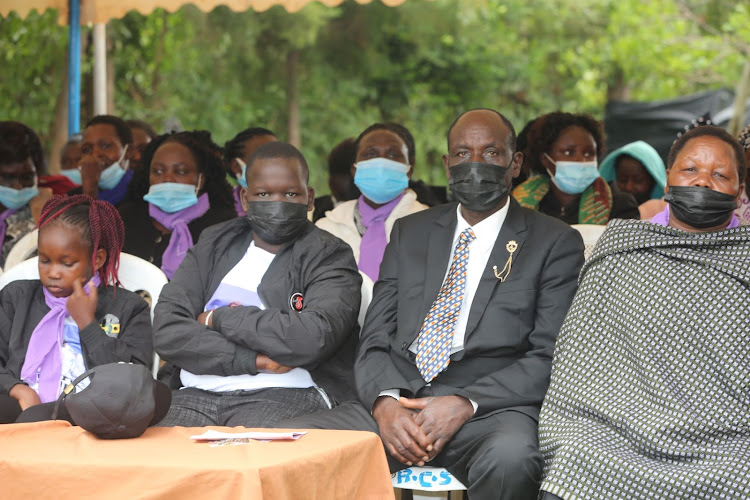 Caroline Kangogo's children with their grandparents Selinah and Barnabas Korir during her burial at Nyawa village in Elgeyo Marakwet county
Image: JESSICAH NYABOKE

The family of deceased policewoman Caroline Kangogo has handed over her two children to her estranged husband in Kericho county.

Mzee Barnabas and Selinah Korir handed over to their son-in-law Richard Ng’eno a boy aged 11 and a girl aged seven who had been living with them in Nyawa village, Elgeyo Marakwet county.

Ng'eno is a senior cop attached to the Maritime Police Unit based in Mombasa.

Kangogo had gone underground, leaving the children behind in their home in Kasarani police lines in Nakuru county after she was linked to the murder of her colleague John Ogweno.

Kangogo fled the scene in Nakuru town only to be later placed in yet another murder scene in Kiambu, where the body of a man wasn found in a hotel room with a bullet to his head.

According to a police brief, the deceased, Peter Ndwiga, had booked room 107 at the hotel in Kimbo on Monday, July 5, at around 4:30pm.

Hotel attendants who spoke to police said the man walked into their premises in the company of an unidentified woman.

The two shocking incidents prompted Kangogo’s parents to dispatch one of their daughters to Nakuru to take away the children who have been staying with them in the last two months.

According to the dead officer’s aunt Selinah Kibor, the family took the move to enable the children to reunite with their father and also continue with their education.

“We are happy to learn that our son-in-law has secured a good boarding primary school for the children in Kericho county where they are studying well devoid of any interruption,” Kibor said.

During her burial two months ago, Kangogo's husband Ng'eno kept a low profile at the event that was attended by hundreds of mourners.

He declined the request by the master of ceremony to speak to the mourners, among them Deputy Governor Wisley Rotich, who had gathered at her parent’s home to pay their last respects.

Kangogo was found dead in her parent's bathroom situated 40 metres away from the main house.

Her family mourned her as a humble woman and asked the police to investigate whether she died by suicide after killing two men as alleged.

"Caroline Kangogo was not the one the media reported, she was a good person," her brother Mark Kangogo eulogized her.

The slain cop’s father Kibor dispelled widespread claims his daughter was killed, noting that from his own assessment of the scene, there was no indication of foul play.

"I do not like it when people go on with these insinuations that she might have been killed,” he said.