Party reinstates leader of majority Peter Thomi and his deputy Mutahi Muritu who were removed in April. 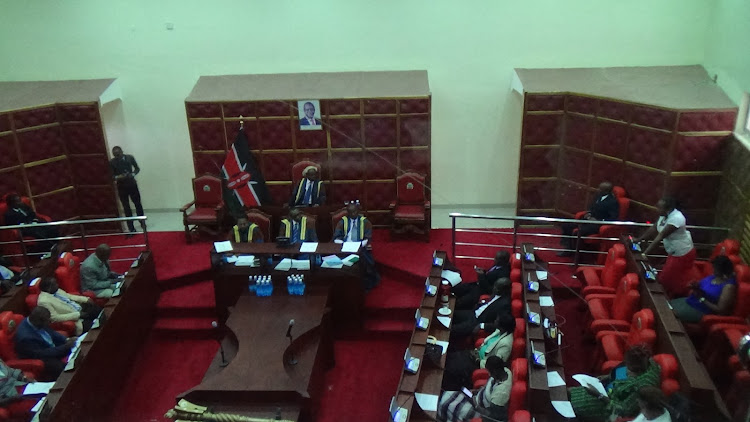 The ruling Jubilee Party has reversed changes made by the Laikipia county assembly in April.

In a communication to the speaker Patrick Waigwa, secretary general Raphael Tuju said the party resolved to reinstate leader of majority Peter Thomi and his deputy Mutahi Muritu who had been removed by the assembly leadership.

“The Jubilee Party National Management Committee made the following resolution on the leadership on the Laikipia county assembly after wide consultation and in accordance with the House Standing Order 19, that the two shall remain in their respective positions of leadership,” read the communication sent on Monday.

Jubilee members in April made several charges, removing long-serving majority leader Thomi, who is Githiga McA, and replacing him with his Igwamiti counterpart Joseph Kiguru.

In the changes communicated by the speaker after receiving minutes of a meeting held by members from assembly whip Charubo Kaparo (Segera), deputy majority leader Muritu (Tigithi) was replaced by Veronicah Ikunyua (Nanyuki).

The assembly further removed Thomi from the County Assembly Public Service Board together with minority leader Jacob Edom (Sossian), who was replaced by Umande MCA Daniel Mugweru and nominated MCA Catherine Kibue.

Kibue told the media that Thomi supervised exercises that did not conform to what the board envisaged, like irregular hiring of staff and promotion of others.

“It was not good of Thomi to continue sitting on the board knowing very well that some irregularities were happening under his watch,” Kibue, who represents women in the assembly, noted.

Kiguru, the then-incoming majority leader, said there had been a miscommunication in the running of the government and this was the reason for the removal of his predecessor.

He noted that the Jubilee MCAs and those from allied parties held a meeting that came up with the changes.

After making the communication, Waigwa barred any reactions from members noting that the matter was a party issue and he only needed to make sure that it had abided by the assembly's standing orders.

Reacting to the news, Irene Wachuka (nominated) said it was fair enough for women to be recognised in leadership. Stephen Kamau (Thingithu) said the assembly had been divided between the elected and nominated members, and that should not be witnessed anymore.