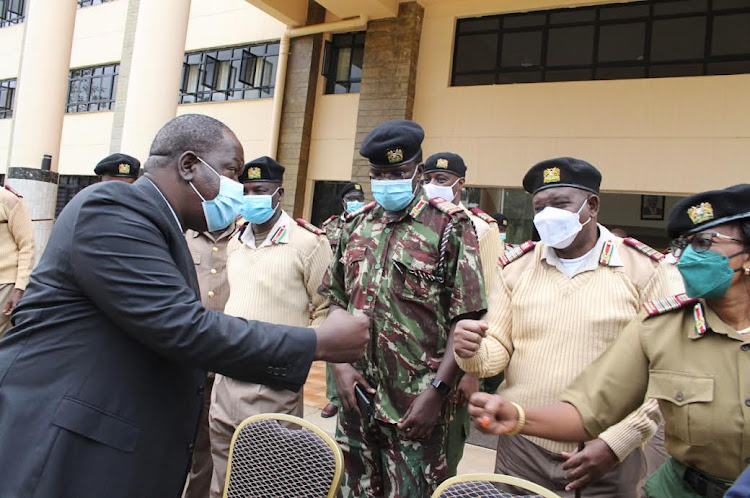 Interior CS Fred Matiang'i is on Friday expected to visit Laikipia and bolster the military-backed operation flushing out gunmen and putting an end to cyclic violence.

The CS said on Thursday he will announce changes in operations and advise all stakeholders on how to handle the crisis.

The operation began on Monday night. The focus is the Laikipia Nature Conservancy, which has been declared a disturbed area and the immediate focus of the operation.

Matiang'i  said lack of attention to early warnings signs had led to the current strife in which gunmen and livestock invaded private farms. Gunmen have raided farms and conservancies, torched buildings and killed residents.

“I keep asking administrators to pay attention to early warnings. Failure to do so has partly caused the challenges we have in Laikipia," he said.

The CS spoke after meeting county and regional commissioners at the Kenya School of Government in Nairobi.

He has said the strife goes beyond cattle rustling and competition for water and pasture. Such violence is organised and involves criminal gangs, he said.

Landownership at the centre of Laikipia violence
News
8 months ago

Matiang’i revealed he will reconfigure many operations during his visit to achieve a comprehensive approach to land, administration and other issues.

While operations intensified, more structures were burnt on Wednesday.

The government has launched a major, seven-day operation to permanently end the violence that recurs ahead of every general election.

Matiang’i said the operation involves a multi-agency team to coordinate all responses and address the basic drivers of the conflict — beyond the fight for pasture and water.

He said the government's multi-pronged approach is very different and unprecedented.

“We want to resolve the matter completely, but as a rule we don’t like making comments when an operation is going on. We just started an operation," the CS has said.

He said when the operation reaches a certain point and achieves certain goals, he and others will give extensive interviews and detail the operation.

Many government agencies are involved, not only KDF, police and security. The military is offering air cover and other support.

Lands, KFS and KWS are likely involved. Displaced people are to be resettled.

The operation started on Monday night with the declaration of a dusk-to-dawn curfew in Laikipia Nature Conservancy. It followed a meeting of the National Security Council chaired by President Uhuru Kenyatta at State House, Nairobi.

Matiangi said the Laikipia Nature Conservancy and its environs had been immediately declared a disturbed area and therefore a security operation zone.

He told all leaders including politicians, businessmen, public officers and others who have illegally moved their livestock into the conflict zone move them by Wednesday. He specifically said 48 hours from Monday.

The NSC meeting came two days after an earlier one by the National Security Advisory Committee (NSAC).

The NSAC meeting also agreed to recruit more National Police Reservists to aid the operation as they know the territory.