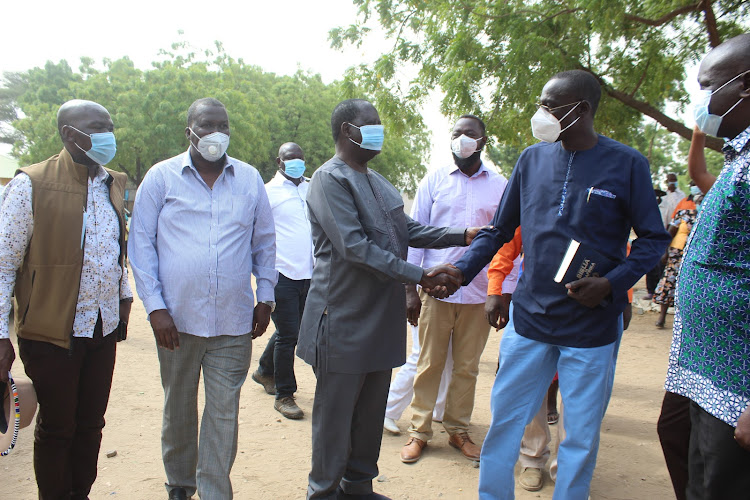 At least seven aspirants have declared they want to succeed outgoing Turkana Governor Josphat Nanok who is aiming for a national seat.

Nanok is a regional point man for Deputy President William Ruto and is the UDA coordinator for North Rift. He was removed as ODM vice chairman for his pro-Ruto position.

Nanok called on residents to support UDA candidates in the next election, saying the unity of purpose will renew hope for Turkana in national politics.

After serving two terms, Nanok has said he will endorse the best person to succeed him.

Nanok says he want to stay active in politics and champion the interest of Turkana at the national level.

“Politics is about the interests of the people. I deplore those who want to be governor to further their selfish agenda," Nanok said on Sunday.

Others are CS for Petroleum an Mining John Munyes, Malachy Ekal and Turkana Senator and former Senate Speaker Ekwee Ethuro.

Nanok, former chairman of the Council of Governors, has a well-oiled political machine to promote himself and his preferred successor.

Nanok and Lokaale are allies and the governor is considered likely to endorse the speaker.

Last month, a delegation of Turkana leaders headed by Nanok visited DP Ruto at his residence in Karen. They failed to agree on who would be UDA's candidate for governor.

"We could not settle on who will be the UDA flagbearer to succeed Nanok because of some issues we were told to resolve," a source close to the meeting said. He sought anonymity.

After the choice, he said, some leaders are expected to decamp from UDA and Tangatanga and join the Kieleweke team led by Munyes and Lomurkai.

Nanok said he parted ways with ODM because it did not consider the best interests of the people of Turkana. Nanok opposed BBI, which ODM leader Raila Odinga  supported.

In 2019, Nanok declared his support for  the pro-DP Tangatanga group, saying he was sidelined by ODM

He was replaced as party vice chairman by Lomurkai.

When he visited Turkana in February to promote BBI, Raila complained that Nanok had deserted him.

“Governor Nanok is my friend," Raila said, recounting how he has promoted Nanok over the years.

He said he campaigned for Nanok to become MP, picked him as minister and appointed him as assistant minister in the coalition government.

The ODM boss also said he gave Nanok the strategy to run for governor and campaigned for him in 2013 and 2017.

"After reelection, you are walking with people opposed to my ideologies," Raila said.

Four counties to get Sh559 million for drought mitigation

About 100, 000 households to benefit from cash transfers set to be released from August 16.
Counties
1 month ago

Inside bid to solidify Northern Kenya behind Raila