Government officials term the water supply a game changer in the provision of services to the park.

• Kisilu said residents of Longonot and Mai Mahiu where the pipeline passes through, would benefit from kiosks that would sell water at subsidised rates.

• Several businesses in the park, including the Inland Container Depot, will benefit. 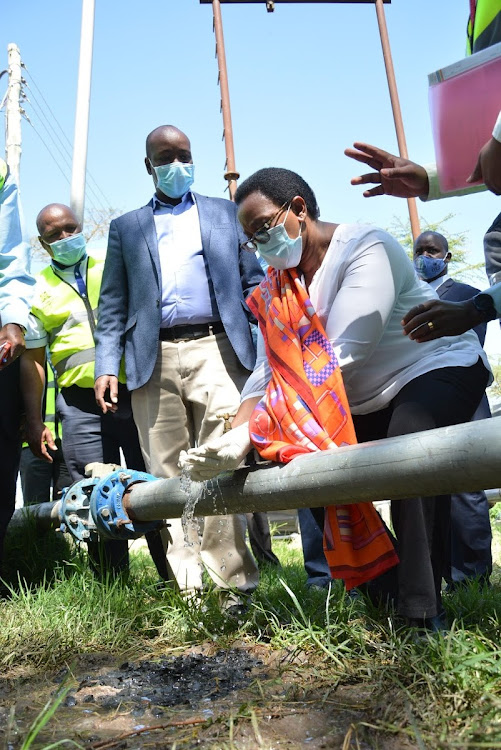 Nakuru Governor Lee Kinyanjui and Water CS Sicily Kariuki sample water from one of the boreholes sunk in Naivasha to serve the industrial park in Mai Mahiu.
Image: GEORGE MURAGE

The industrial park in Mai Mahiu will get more than six million litres of water daily following the completion of a pipeline from Naivasha town.

Several businesses in the park, including the Inland Container Depot, will benefit.

Naivasha subcounty commissioner Mutua Kisilu said on Tuesday construction of the pipeline, which is connected to five boreholes, is complete.

Senior government officials described the water supply as a game-changer in the provision of services to the park.

“The park is one of the government’s major projects, and we are happy to report that the water supply is resolved as part of addressing the needs of traders,” he said.

Kisilu said residents of Longonot and Mai Mahiu where the pipeline passes through, would benefit from kiosks that would sell water at subsidised rates.

Lakeview MCA Simon Wanango said the development of the industrial park is a major boost to Nakuru county and Naivasha residents.

“Water from the five boreholes is fluoride-free. This will come in handy for Naivasha residents whose health has suffered due to the high levels of fluoride,” he said.

Speaking earlier during a tour of the pipeline, Water CS Sicily Kariuki said the government is keen to make the park fully operational.

“The government has provided funds to fully supply the industrial park with water and this is a reality as the contractor enters the last phase,” she said.

“In the next couple of weeks five water kiosks will be constructed along the pipeline to assist communities along the line,” she said.