BLOOD ON THE ROAD

They're fast, easy, cheap and dangerous. Police say they cause many accidents because they violate rules

• Each junked motorbikes tells a tale of widows, widowers, children and other family members  lost as result of boda boda crashes.

• The traffic department says three or four boda boda riders die each month, many of them inexperienced. 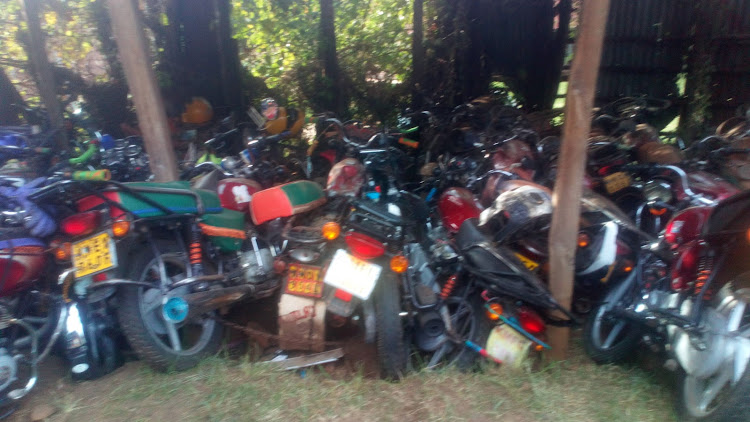 Each of these boda bodas tells a story of widows, widowers, children and other family members lost to horrific crashes.

As long as it remains a graveyard out of sight, people can push it out of mind as more and more people ride boda bodas for a living and for transport.

But think about the families, those of the riders and passengers and the families of those they collided with.

Hardly a week passes without deaths being recorded, in an ominous trend.

Statistics from the traffic department show as many as eight road accidents occur across the county each month. Three or four boda boda riders die.

Speeding, failure to observe traffic rules and signs and refusal to give way have been cited as the main cause of these accidents.

“From our investigations, the riders involved in most accidents are those hit by vehicles either for failing to give way while on the highway or they hastily enter from a junction without exercising due diligence,” said one traffic officer.

He spoke on condition of anonymity because he is not authorised to speak to the press.

Boda boda riders have also been accused of failing to stick to the traffic regulations of carrying one passenger and wearing helmets and reflector jackets.

And, while the buck stops at the individual rider, it also stops at the boda boda riders’ associations that are supposed to rein in their members.

County chairman Alexander Rono said for the last five years, there has been no death or accident involving any of its members.

Speaking to the Star during an interview, Rono confirmed most accidents in the county and along the main highway of Kaplong-Mulot are caused by motorcycles.

He was quick to explain these accidents are caused by inexperienced riders and those just learning.

Rono said most of the riders operating in the village come to town while carrying more than one passenger, contrary to the rules.

And they don't yet know how to operate their machines on the highway, thus, they get hit by moving vehicles.

The meetings have borne fruit since the accidents have declined significantly.

Simeon Langat, who lost his 15-year-old son in an accident recounted to the Star how one Sunday evening turned tragic.

Langat said he was away when he received news his son had been involved in a road accident and had been rushed to Tenwek Hospital. He had serious head injuries.

The motorbike he was riding — lent by a friend — is said to have collided head-on with a private car while trying to avoid a pothole on the Bomet-Litein road.

He just wanted to borrow the bike for a quick errand to pick up some items at a nearby trading centre. That's when the accident occurred.

After hours of fighting for his life, he died.

Reeling from the shock, Langat now wants parents to be mindful of their children, especially when they are at home for holidays. He said most accidents involve young children or youths.

“Let us watch over them, these motorcycles are dangerous machines," he said.