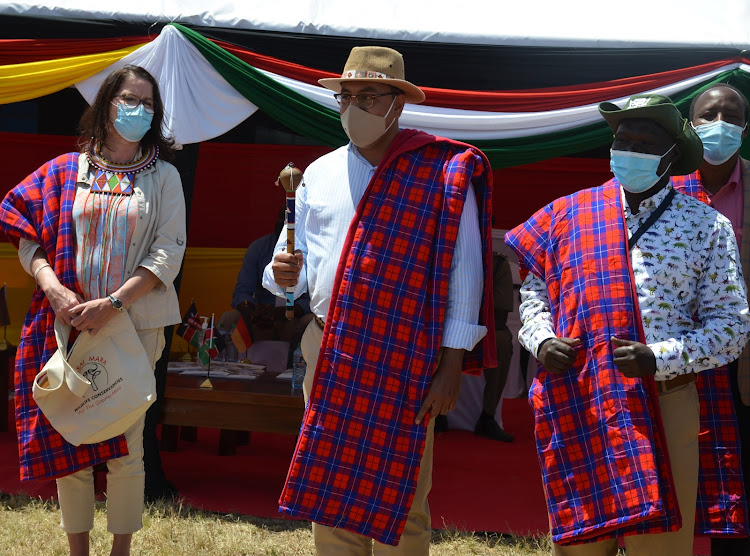 Conservancies in Maasai Mara Game reserve received a major boost after the German government gave a Sh660 million grant to mitigate the effects of Covid-19.

The funds will go to 15,711 landowners and 362 rangers in the form of lease payments and salaries, respectively. The conservancies lost about 80 per cent of tourism revenue to the global pandemic.

The German ambassador on Wednesday said the fund is part of the support her country has advanced to Mara through the Kenyan government given its close working relationship between the two nations.

“We have increased our cooperation with Kenya by providing mobile Covid-19 testing laboratories, supporting small and medium enterprise and we are working with Maasai Mara Conservancies to mitigate the effect of Covid-19,” Gunther said.

She made the remarks during the launch of GIZ Mara conservancies’ project at Olare Motorogi conservancy in Narok county on Wednesday.

“Maasai Mara is a prestigious and beautiful place to be. The conservancies play a big role in ensuring the survival of the game reserve.

"We do not want to see people sell their land because of the effect of Covid-19 but want to help them overcome the challenges that came as a result of the pandemic," Gunther added.

The ambassador, however, asked beneficiaries to ensure they utilise the funds for the sustainable conservation of the tourist jewel.

The four key conservancies that benefitted from the grant are Olkinyei, Olare, Naboisho and Olare Motorogi.

The current crisis led to the closure of camps due to the collapse of tourism. Tourism partners had to take loans to meet their lease obligations, and landowners accepted 50 per cent of lease payments for one year.

In this regard, the conservancies association designed a strategy to respond to the crisis and help conservancies stay afloat by meeting their basic operational costs.

So far, the association, with partners' support, has disbursed over Sh100 million to 13 conservancies from June 2020.

While lauding the German government for the donation, Balala said the move will go a long way in supplementing ongoing economic stimulus programs by the government in the conservancies.

He said the support program will continue for the next two years when the Covid-19 pandemic is expected to have gone down and tourism picked up.

The CS observed that climate change, change in land use and the Covid-19 pandemic are a big challenge to the industry, which is the country's second foreign earner after the agriculture sector.

“The sector continues to experience reduced international tourists’ bookings leading to low business, low capital and increased borrowing to sustain businesses and in some cases total business closure,” he said.

“We are happy to note that this GiZ support will also support my department to establish structures for governance and oversight of conservancies nationally,” Segor said.

He added that conservancies need the support to stay afloat and survive the Covid crisis and recover.

“Conservancies are the main mechanism for securing wildlife space, connecting habitats and buffering parks and reserves in Kenya, they require emergency funds to keep them working,” the PS said.

He reiterated that out of the 160 conservancies in the country, 16 of them are in the Mara ecosystem and play a major role in curbing human-wildlife conflict.

“Conservancies enable us to have more space for wildlife because 65 percent of the animals are outside the protected areas.

It is also an important buffer zone because it creates a wall between the humans and the wild,” he said.

The conservancies, he also noted, will help to ensure that any income coming from the conservancies trickle down to the residents hence improving livelihoods.

Sopia confirmed that investors had to cut lease payments by 50 per cent following a decline in tourism since the onset of Covid-19.