• To mitigate climate change Sh800 million immediate assistance, Sh9.2 billion in the short term and Sh6.7 trillion between 2020 and 2030. That's just the beginning.

•The water has changed wildlife habitats, displacing some. Other wildlife, such as hippos and crocodiles. have moved dangerously close to people. 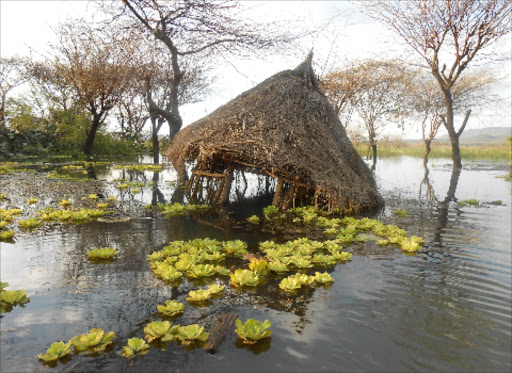 RESIDENTS FLEE: A flooded hut once on the shore of Lake Baringo but now inside the lake itself.
Image: MATHEWS NDANYI

Climate change has caused enormous suffering as lakes rise in Rift Valley and Lake Victoria itself is also breaching its banks.

The warning of death and destruction had already been sounded. Rising water levels is not the only climate change catastrophe. Elsewhere there's drought wrought by climate change.

But the problem is so vast and fundamental, the remedies so radical and costly that nothing could be done to prevent the lakes from rising.

Not even guidance from ancestors could prevent the relentlessly rising water from causing wanton destruction.

It destroyed houses, leaving thousands of people homeless, crops and pasture under water.

Wildlife lost their habitats, driving them to to higher grounds where displaced families also sought refuge, causing man and beast to clash.

Hippos and crocodiles have moved dangerously close to people; attacks have increased.

By 2020, 19 lives had been lost to crocodile attacks due to rising, spreading lakes.

The environment has also been compromised through changes in water quality, soil characteristics and invasive species.

Nicholas Keino, 30, knows this all too well.

Born and brought up near Lake Barinto, he had to move to higher ground last year and start a new life.

“The Kenya Red Cross Society helped us with tents and small household items. There has been no help from the government,” the father of three said. He is also the guardian of two children of his deceased sister.

Keino used to buy and sell livestock. Now he drives a matatu. 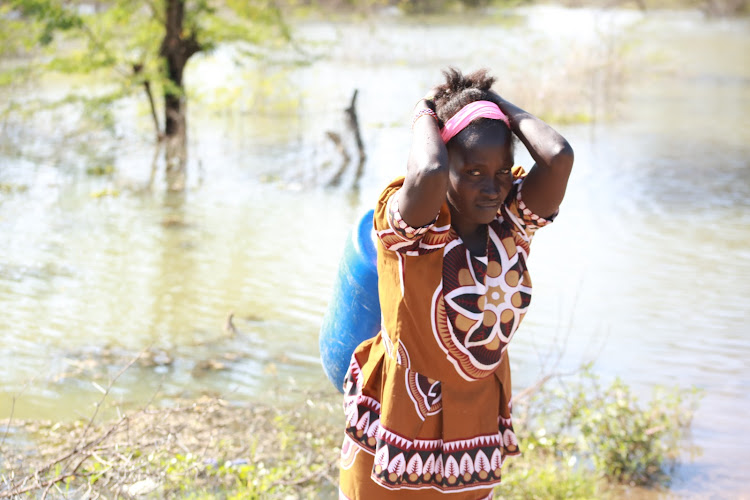 Keino has lots of suffering company in Rift Valley and around Lake Victoria.

William Changole’s is another case of nature's wrath.

“I lost all my investments last year due to the rising lakes. It would be good if government can assist,” he said

"Now I'm just waiting. I have accepted and moved on. I will decide later whether to relocate. For now, I thank God I'm alive.

Changole invested all his hard-earned cash in business in Lake Bogoria after retiring as deputy provincial commissioner.

Expecting nothing but good returns, Changole had built a 20-room Papyrus Inn to cater for middle-income guests and local tourists, as well as shops and a nyama choma eatery.

Within seven months, all his investments had been swallowed by the water.

Changole was depressed for a while.

One day, he found himself stranded and confused in Kitale town, despite being familiar with the place.

Changole later realised he was suffering the trauma of such a massive loss. At least six people have died due to depression caused by the lake's rise.

Like other victims, he expected help from the government. Little or nothing has been forthcoming.

Governments try to provide some assistance but the needs are vast.

“I had invested my 18-year life savings into business before the water swept it all away,” he said.

Kipkeron is now living in two 10-foot by  10-foot rooms in Loboi Centre with his entire family. His property was lost between July and August last year and all he is left with is a title deed for submerged land.

Within Lake Nakuru, Solai and Elementaita basins, socio economic issues are evident  in the Mwariki-Barut settlement, where 1,500 households who are at great risk of losing Sh4.5 billion.

In Lake Solai 2,626 acres of private cropland and pasture have been submerged.

More than 6,000 acres of grazing land and 11 fish landing beaches have been flooded. More than 35km of road, 16 boreholes and three health facilities have been destroyed.

The surge of Lake Turkana has affected 30,186 people.

As the disaster continued the government formed a multi-agency technical team. The mission was to establish the causes, socioeconomic impacts and recommend how to improve the situation and cushion affected families.

The team worked with UNDP, the Red Cross and the Stockholm Environment Institute by undertaking a scoping mission from October 21 to October 30, 2020.

They covered 11 lakes and one dam.

"The submerging of large tracts of lands has also caused loss of farmlands and grazing lands, triggering rising cases of human-wildlife conflicts," the team said.

It recommended Sh800 million immediate assistance of the displaced.

The team said the freshwater ecosystems are particularly vulnerable to the effects of climate change, for example, changes in water availability, water quality, and evaporation's effects on ecosystem structure and function.

The situation has been worsened by unusually high rainfall  as a result of climate change and global warming.

The team said climate change is the main driver of rising water levels, saying increased land degradation and over-cultivation has been severe in some areas.

"This has resulted in reduced water percolation into the groundwater systems and higher rainfall runoff from land, leading to larger volumes of water flowing directly and rapidly from the land surface into the lakes."

The team said the run-off triggers siltation and sedimentation on the lake floors, reducing the volume of water that can be stored.

"Tectono-magmatic field stress coupled with seismicity could also influence the swelling waters. Far tectonic processes happening in the Mid-Atlantic ridge could have implications on the East African Rift system," their report said.

The National Climate Change Council is yet to start operating.

The Council of Governors has urged President Uhuru Kenyatta to ensure  the Council is operating. Vihiga Governor Wilber Ottichilo made the appeal on July 20.

The call to put the council to work comes as Kenya is grappling with how to get resources for mitigation and adaptation.

In 2016 Kenya ratified the Paris Agreement and submitted ambitious Nationally Determined Contributions (NDC) with a commitment to reduce emissions by 30 per cent  by 2030.

Environment PS Dr Chris Kiptoo says the updated NDC increases mitigation commitment from 30 per cent in 2016 to 32 per cent by 2030.

The NDC also commits to enhance resilience in all sectors of the economy, Dr Kiptoo says.

Government cannot shoulder all the costs.

Kenya’s economy is largely dependent on climate-sensitive sectors such as tourism and rain-fed agriculture, both susceptible to climate change and extreme weather.

Early this year, the government tried to mobilise resources to help victims.

The education sector needs Sh250 million. The government said all those in boarding had been temporarily relocated.

Day scholars have been studying in temporary structures.

The energy sector needs Sh227.7 million and another Sh2 million for monitoring and evaluation.

In short term, a total of Sh2.9 billion is needed.