• Homicide officers will also exhume the body of Grace Njeri who was buried without a postmortem and DNA test.

• Investigator Peter Kamau told a court in Eldoret police received several other reports of girls who were killed, allegedly linked to Wanjala. 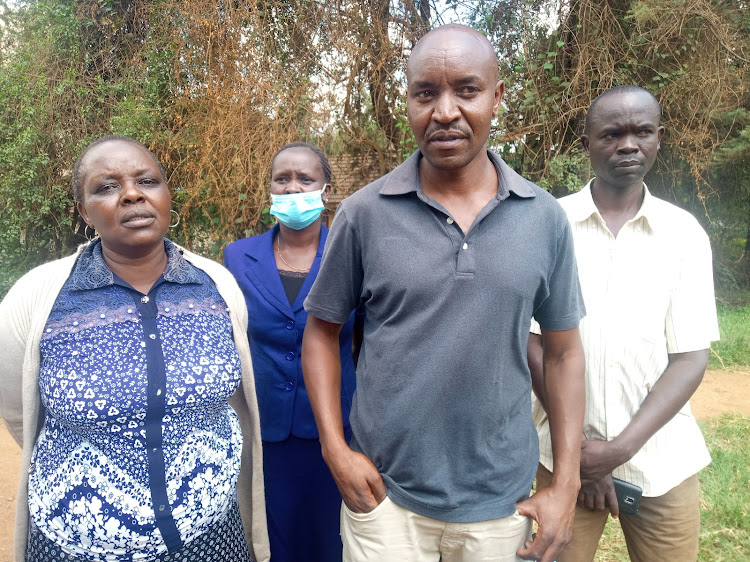 GRIEVING: Family members of some of the victims of the Moi's Bridge serial killer
Image: MATHEWS NDANYI

Homicide officers are investigating fresh reports that confessed serial killer Evans Juma Wanjala may have murdered several other young girls, in addition to the five identified.

Detectives and forensics teams will also exhume the body of Grace Njeri who was buried without a postmortem and DNA test. She was one of the five and her body was dismembered.

It will be exhumed at Karara Nyakinyua farm near Moi's Bridge.

Investigating officer Peter Kamau on Thursday told a court in Eldoret they had received several other reports of killings of girls linked to Wanjala. He did not elaborate but called the case "enormous".

Senior resident magistrate Naomi Wairimu gave the homicide officers an extra 21 days to hold the suspect so they can complete investigations.

The case will be mentioned on August 12.

“You Honour, the investigations are enormous. Considering that we have other complaints we are dealing with, we need to tie up all the issues before we produce the suspect in court," Kamau said.

He said they needed the time to exhume the body of Grace Njeri who was buried at their home near Moi’s Bridge. Body parts were found a month after she had gone missing.

Kamau said the suspect Evans Wanjala has three other pending sexual offences in Makindu where arrest warrants had been issued against him.

The court released Daniel Kipkurgat Maru, who had also been arrested as a suspect in the killings, but police said there was no evidence to hold him.

He said Wanjala had undergone a psychiatric assessment and some files already had been forwarded to the DPP before the suspect is taken to court to take a plea.

“We have also extracted a confession from him and recorded statements from several witnesses,” Kamau said.

He told the court they had also visited the scenes where the murders took place. The suspect had led them there and reenacted the crimes.

Wanjala is linked to the killing of five girls at Moi's Bridge in Uasin Gishu county. He was presented before court virtually.

Following his arrest last week, a statement from the Directorate of Criminal Investigations said he brutally murdered five young girls after assaulting and defiling them.

The suspect is said to have committed the murders between December 13, 2019, and June 15, 2021. He first defiled the girls, then strangled them to death.

The DCI statement said the minors, all aged between 10 and 15, were lured by the suspect from different locations within Moi’s Bridge. They were then taken to secluded areas.

"In a chilling confession by the killer who took detectives on a re-enactment of his ghastly missions, he gave a blow-by-blow account of how he took away the lives of Linda Cherono, 13, Mary Elusa, 14, Grace Njeri, 12, Stacy Nabiso, 10, and Lucy Wanjiru, 15, after defiling them," the DCI said in a statement.

In some cases the victims' remains were charred.

Wanjala was dressed in a PPE along with several officers to conceal him from a lynch mob.

“It’s so shocking a human being can do all this to young children. We are pleased he has been arrested to face the law," resident Lenah Kemboi said.

Police said Linda Cherono’s body was found on June 15 near Baharini Dam, after she went missing a few days earlier. Her body was half-naked, bruised, defiled and strangled.

All murders were essentially the same. Some bodies had been left in bushes to be eaten by animals. Two bodies were in gunny bags, covered with vegetables and left to rot in the bushes.

During the re-enactments, homicide detectives were accompanied by scene-of-crime and photographic and acoustics experts to record Wanjala and collect evidence.

Wanjala was positively connected to the five murders by the DCI forensics lab.

In 2018, he had defiled two minors in Kibwezi. He was arraigned, released on bond and fled into hiding.

The Makindu law courts issued a warrant for his arrest.

Moi’s Bridge murders were cracked after homicide detectives from DCI headquarters in Nairobi went to Eldoret West and took over the case files.

Governor Jackson Mandago said the murders had caused much anguish to the families and spread fear among residents.

He said his administration is working with security agencies, parents, schools and churches on security in Moi's Bridge and other parts of the county. Informing girls to beware of strangers is crucial to the information programme.