• The man was walking home around 5pm when the animal ambushed, attacked him.

• Daughter, 7, also attacked and her face was mauled while trying to rescue her father. Animal killed with spears. 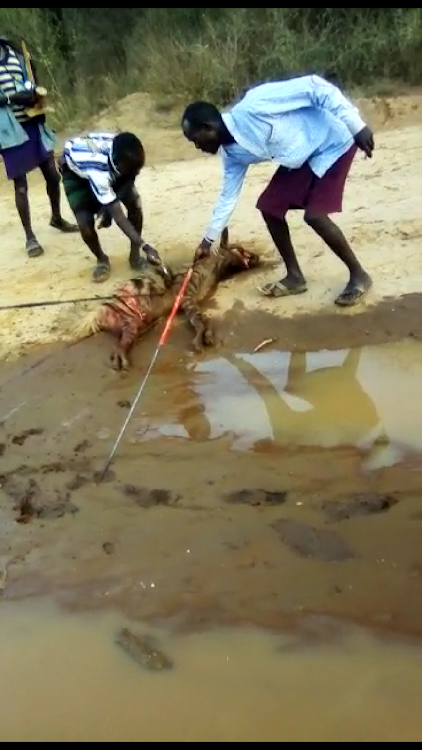 KILLER HYENA: Warriors kill hyena after it attacked a man and his daughter at Atoleyan village in Tiaty, Baringo, on Saturday.
Image: JOSEPH KANGOGO

A hyena attacked a man and mauled his seven-year-old daughter's face when she tried to rescue him in Tiaty, Baringo county.

Two children escaped the attack on Saturday and villagers killed the hyena with spears.

“It happened around 5pm while the man was heading home after a normal day-long meeting with fellow village elders,” Paka sublocation assistant chief Wilfred Namudet said on Tuesday.

The near-death attack occurred in a thicket near Lodadoi's home around remote Atoleyan village in Paka sublocation.

Namidet said the beast suddenly lunged out of the bush. The man tried to fight off the hyena with a walking stick but it overpowered him.

He said it jumped on him, biting and tearing at his legs until he fell to the ground.

“The victim screamed and his three children aged between four and 10 years heard and ran to his rescue," Namidet said.

When they arrived at the scene, the hyena turned on the seven-year-old girl, tearing and disfiguring her face, mouth and nose.

“The rest of the children managed to escape unhurt leaving the two at the mercy of the hostile animal,” Namudet said.

Two youths passed by and mobilised villagers who rushed with spears to kill the beast and rescue the man and his daughter.

“The animal attacked and caused serious injuries and piercing pain but did not feast on the flesh of the victims,” the administrator said.

He said cases of animal attacks have increased for two years in the area.

“We can’t tell exactly where the animals are coming from,” Namudet said.

Loyamorok MCA Maria Losile on Tuesday said it is the third such attack since last year.

“In March last year a woman was attacked and her body eaten at Riongo while another one lost her fingers after being bitten by hyenas,” Losile said.

She called on the Kenya Wildlife Service to hunt down and drive wild animals back to game parks.

“Our people are living in fear of being attacked by stray lions, leopards and hyenas, especially while walking at night,” Losile said.

The incident occurred a few kilometres from Lake 94 in Baringo South where a 43-year old fisherman was eaten by crocodiles last Sunday. Only a leg was recovered.

Baringo KWS warden Peter Lekeren said the due process to compensate the affected families shall only begin after the victims are discharged from hospital.

He noted increasing cases of human-wildlife conflict in the county and urged residents to be extra cautious while walking, especially at night.

Lekeren appealed to residents to immediately report sightings or attacks by wild animals.