• An elder from Turkana, Ambassador Joseph Achuka, said they have learned from reformed warriors from the region.

• “Peace cannot be found in big hotels in towns. We need to move to the ground to find permanent solutions to factors contributing to these conflicts," he said. 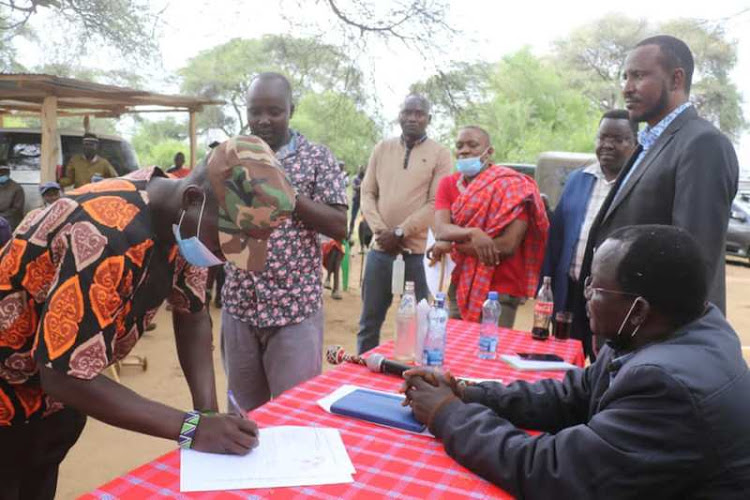 Kraal elders from Tiaty and Turkana East have signed a peace accord aimed at helping to unite the two warring communities.

The six-member committee inked the peace agreement as a sign of commitment after a three-day interactive session with their counterparts from West Pokot and Turkana counties at Orwa.

The forum was organised by National Cohesion and Integration Commission in partnership with InterPeace.

The forum sought to give the elders a first-hand learning experience from West Pokot-Turkana West elders who have managed to maintain peace along their borders since 2017.

"I am optimistic if a similar model is implemented in Tiaty-Turkana East, sustainable peace will be achieved. All we need is a commitment in words and actions by the communities and the leadership,” West Pokot Governor John Lonyangapuo said.

He said most of the county borders are safe. That's why they are extending measures they used to ensure all warring communities in North Rift unite.

“Peace cannot be found in big hotels in towns. We need to move to the ground to find a permanent solution to factors contributing to these conflicts," he said.

An elder from Turkana, Ambassador Joseph Achuka, said they have learned from reformed warriors.

“I am apprised of what reformed warriors from this region are doing. They have actively engaged in peace-building and this has helped in uniting the two communities along the border,” he said.

Achuka said they are going to have one water point for both communities and immediately follow up on stolen animals and return them to their owners.

“We shall immediately respond to any attack, not a day after,” Achuka said.

"We are looking for the root cause of insecurity for development to be realised."

He said they must open security roads in Kapedo, Tiaty and Lomelo to end ambushes.

“Marginalised counties should stop conflict and start developing their regions since funding has been devolved to the grassroots level,” he said.

Lesoto said they will work together with all governors from the region to bring peace and help spur development.