Illegal buildings to be demolished in Kitale town

• Khaemba wants to restore order in the town which he says is in a chaotic situation; demolitions ordered.

• He is due to appear before the county PAC sometime this month to explain accounting problems and lack of documentation flagged by the Auditor General.. 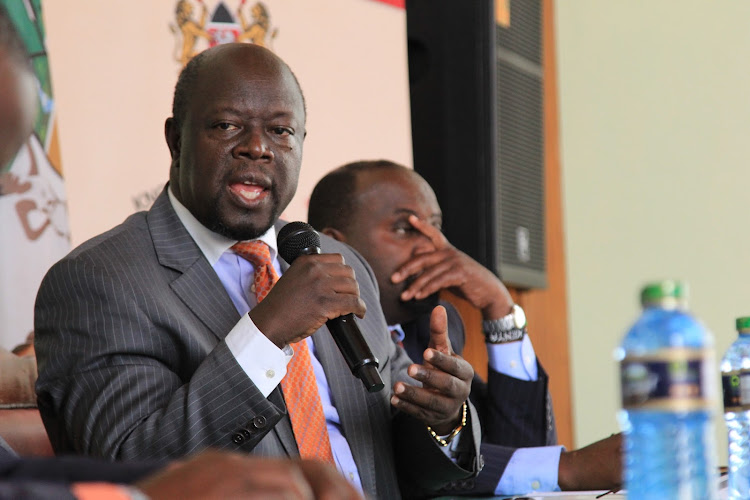 He has ordered the demolition of all kiosks and illegal buildings in Kitale town, including those on road reserves and public land.

Khaemba said he is determined to restore order.

Speaking on Saturday in Kitale, the governor said many traders had taken advantage of the county's leniency to erect illegal structures all over town. They never sought any approval from his administration.

He said some traders were using force to operate anywhere in town but they would be evicted forcefully by security teams.

“We will not allow that and we will ensure they are removed from those areas at all costs," Khaemba said.

Trans Nzoia county has also banned funeral service providers, including hearse owners, from operating outside hospitals in Kitale town and other parts of the county.

Governor Khaemba says the hearse operators and coffin makers were illegally locating their businesses outside major hospitals where they hound patients' families.

He directed the funeral service providers be evicted from around hospitals and relocated to other areas away from roads leading to hospitals.

Trans Nzoia MPs and MCAs have accused  the governor of a poor development record characterised by many stalled projects over eight years.

It was one of Khaemba's flagship projects.

Wamalwa accused Khaemba of letting down the people of Trans Nzoia and his party, Ford Kenya.

Wamalwa and Pukose have also asked Khaemba to honour summons by the county assembly public accounts committee. He is required to explain financial mismanagement issues raised in a report by the Auditor General.

The legislators urged Khaemba to salvage his legacy by ensuring work is completed on the hospital, the Kenyatta Stadium in Kitale and the main market in the town.

They said Khaemba must appear before the assembly committee, which is a recognised oversight body, just like the Senate.

“He has to go there and explain all that they want to know because the county is a public entity and Khaemba is accountable to residents of Trans Nzoia, Wamalwa said.

The county boss has already agreed to appear before MCAs in the assembly for questioning about issues raised by Auditor General Nancy Gathungu on anomalies and lack of documentation in spending of public funds.

Khaemba was to appear before the assembly's public accounts committee (PAC) last month but he requested a delay to prepare and appear this month.

“I would like to request the invitation scheduled for June 4 be postponed to  July due to unavoidable circumstances," his letter said.

The governor said his administration appreciates the gravity of the matter and will avail themselves on the PAC, preferably in July.

PAC chairman Peter Waswa confirmed the governor's office had requested to prepare written responses to the report by the Auditor General.

Speaking to the Star on Tuesday, Waswa said the date of Khaemba's appearance would be announced.

Waswa said the county boss and his team were to be questioned on the audit report and the stalled construction of the hospital.

The MCAs want Khaemba’s administration to explain why there was no register for assets of the county valued at more than Sh8 billion.

Gathungu flagged financial anomalies and discrepancies amounting to more than Sh3 cillion in Trans Nzoia county during the 2018-19 financial year.

The latest audit report cites many cases where financial expenditures by the county were done irregularly and without supporting documents, contrary to regulations on management of public funds.

Gathungu said the statement of receipt and payments for the year ended June 30, 2019, reflected receipts totalling to Sh6.7 billion against Sh7.8 billion reflected in the Financial Integrated Management System (Ifmis) on the same date, resulting in unexplained variance of Sh1.06 billion.