Association visits schools to sensitise learners on dangers of the practice 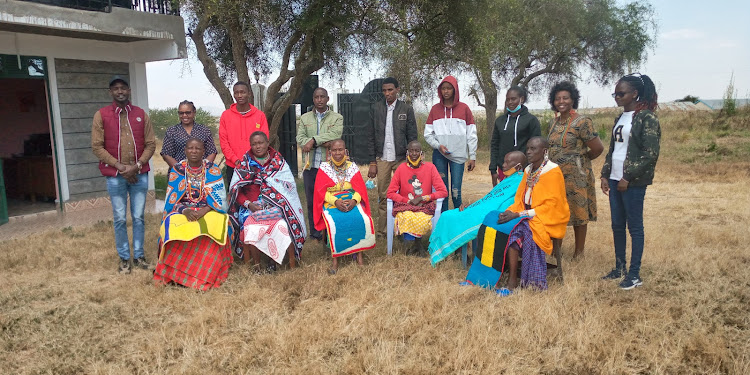 Some of the ant-FGM youth champions and reformed circumcisers at a meeting at Ilaramatak Community Concerns organisation in Inkinyie, Kajiado Central.
Image: PHILOMENA KILONZO

A group of youths from Kajiado central have rolled out a sensitisation campaign to help end female genital mutilation.

The youths, mostly university students, are championing against FGM to help the government end the harmful cultural practice in the country by 2022.

Under the Dallalekutuk University Students Association, the youths visit primary and secondary schools to create awareness about FGM and its effects.

Faith (not her real name), a 26-year-old girl from Inkinyie who is an FGM survivor, joined the association with the aim of speaking for the voiceless and help save young girls who might be subjected to FGM in the future.

She was circumcised at the age of  10 years by her parents.

“It was a decision my parents made,  I didn’t have a choice but agree to it,” she said.

Faith says she knew about the dangers of FGM when she was 18 years after engaging with other anti-FGM champions.

“If today I was asked to undergo the cut, I wouldn’t do it because I am now informed on its dangers. I was empowered to know what is right and wrong. That is why I want to empower other girls to know that they have a right to say no to FGM and even the law is on our side,” she said.

Kelvin Lameyian an anti-FGM champion said the association visits schools and mentors the students by educating them on health and academic issues.

“Our organisation is recognised so schools allow us to talk to the leaners but we do it in moderation and respect so that we don't offend those we are trying to sensitise and also so that the community does not shun us,” Lameyian said.

Speaking to the Star over the weekend in Inkinyie where they held a meeting, Lameyan said they formed the association in 2019 after noticing the effects caused by the cultural practices done on women and girls that saw the community lag behind in development.

“Our parents used to practice FGM they had their own perceptions or beliefs, but the world has changed, our generation goes to school and gets knowledge but FGM is a threat to women growth,” he said.

He added some practices like FGM, early marriages/pregnancies and by girls not attending schools have made the community lag behind.

Hilton Ndaime a finance student from the University of Nairobi said so far, the residents of Kajiado Central have seen the benefits of dropping the practice because they are able to see change in their girls even in academic performance.

“When we visit the schools and sensitise the learners, they see change even in performance because we have directed them towards the right direction by doing only what’s of benefit to the society and to the girls,” he noted.

He urged young girls to be confident and speak against harmful cultural practices, adding that they have a right to say no to FGM because it is illegal.

Ndaime however revealed they face a lot of discrimination from the community who accuse them of abandoning their culture.

“We are facing criticism for trying to eradicate the harmful practice and end up being rejected by the society even your own parents saying we are rejecting our culture.”

While using a Maasai proverb “enkong naipang engen” which means “by living long you see many things”, Ndaime called on parents to embrace change without feeling disrespected.

She said the girls have a right and freedom from ill treatment and torture as stated in the constitution Article 25.

Lagat added that FGM potentially violates the right to the highest attainable health because it has immediate health consequences as well as long term health consequences due to the removal of the health normal genital tissues which interfere with the natural bodily functions of women and girls.

“Some of these effects are excessive bleeding, keloids, prolonged labour during birth which can lead to death of either the mother or the child or even fistula,” she said.