Man arrested for defiling and killing girls to be charged

Evans Juma Wanjala procured the murders between December 31, 2019, and June 15

•In a statement by DCI,  the minors all aged between the age of 10 and 15, were lured by the suspect from different locations before being taken to secluded areas where he defiled and strangled them to death.

•The paedophile led detectives to the scene of every murder that he had committed, where charred remains of the murdered minors had earlier been recovered. 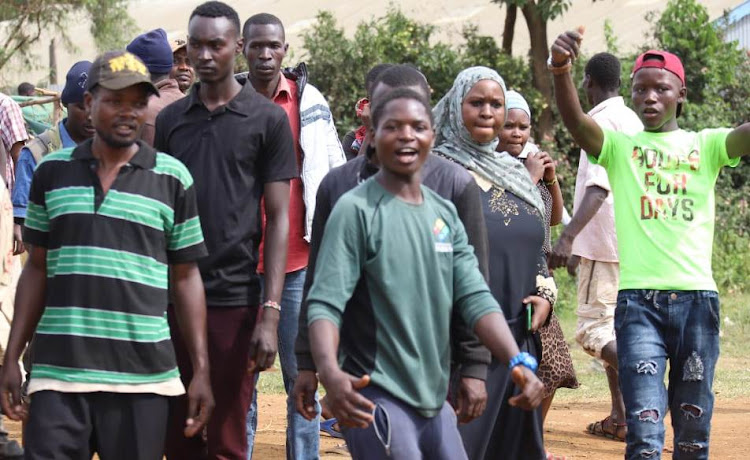 SERIAL KILLER: Residents of Moi's Bridge in Uasin Gishu protesting after one of the killings on June 15.
Image: MATHEWS NDANYI

A suspected serial killer, linked to the defilement and murder of five girls at Moi’s Bridge in Uasin Gishu will on Monday be presented before a court in Eldoret to face charges.

In a statement, the Directorate of Criminal Investigations said it had arrested a serial killer who has murdered five young girls after assaulting and defiling them in the region.

The suspect is said to have procured the murders between December 31, 2019, and June 15, this year.

The statement said the minors, all aged between the age of 10 and 15, were lured by the suspect from different locations before being taken to secluded areas where he defiled and strangled them to death.

“In a chilling confession by the killer, he gave an account of how he killed Linda Cherono, 13, Mary Elusa, 14, Grace Njeri, 12, Stacy Nabiso, 10 and Lucy Wanjiru, 15, after defiling them,” DCI said.

The paedophile led detectives to the scene of every murder that he had committed, where charred remains of the murdered minors had earlier been recovered.

He was dressed in a PPE along with several officers to conceal him from angry mobs who bayed for his blood.

“It’s so shocking that a human being can do all this to young children. We are however pleased that he has been arrested to face the law,” Lenah Kemboi a resident said.

Police said that in one of the instances, Linda Cherono’s decomposing body was found on June 15, near Baharini Dam, after she went missing a few days earlier.

Cherono’s remains were found half-dressed in a bush, with signs of strangulation, defilement and physical injuries visible on her body.

The incident sparked protests along the busy Eldoret - Kitale highway.

DCI explained that the modus operandi of the paedophile was replicated in all the other four murders.

In two other instances, the lifeless bodies of the victims were stashed in gunny bags covered with vegetables and left to rot away in the bushes.

During the re-enactment, homicide detectives augmented by their scenes of crime and photographic and acoustics counterparts documented forensically each of the five murder scenes.

Further forensic analysis at the DCI forensic lab, positively connected the suspect to the murder of the minors.

Detectives have further established that Evans Juma is a habitual offender with pending warrants of arrest against him.

He had on diverse dates in 2018, defiled two minors in Kibwezi and upon being arraigned in court was released on bond.

After his release, he went into hiding prompting a warrant of arrest to be issued against him by the Makindu Law Courts.

This murder puzzle was cracked after homicide sleuths based at DCI headquarters, travelled to Eldoret West and took over the various case files regarding the defilement and killings of the girls.

“The suspect is currently in our hands and will be arraigned in court to answer to charges of murder contrary to section 203 as read with section 204 of the penal code,” DCI concluded.

Governor Jackson Mandago welcomed the arrest saying the incidents had caused so much pain and anguish to affected families and also led to insecurity fears among residents.

They remain in place. 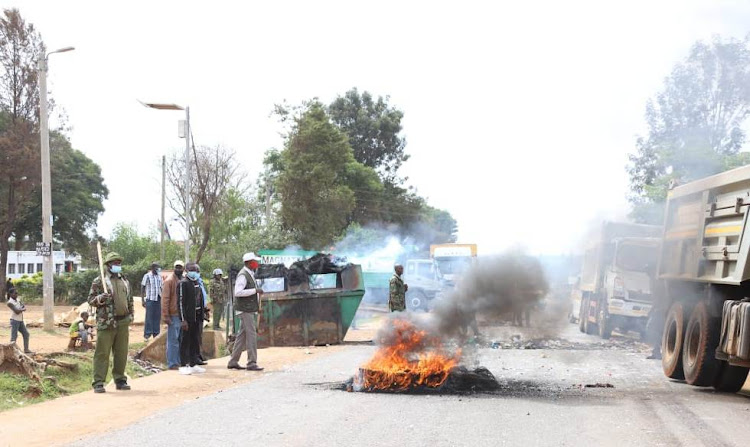 Residents of Moi's bridge burn tires along the Eldoret-Kitale road to protest against the killing of a young girl in the area on June 15.
Image: BY MATHEWS NDANYI
by BY MATHEWS NDANYI
Rift Valley
18 July 2021 - 22:00