•Kangogo had been on the run for 11 days.

•She was a suspect in the killing of two men, including police Constable John Ogweno, in Nakuru on July 5. 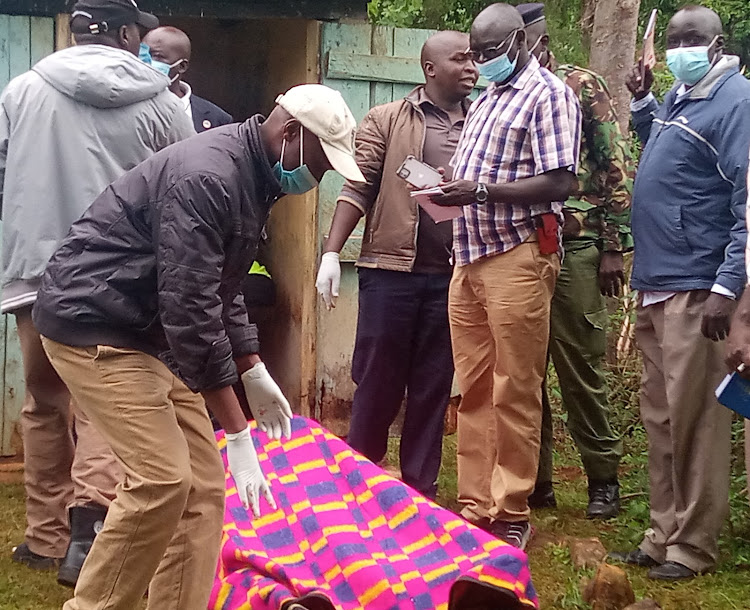 AWAITING AUTOPSY: Caroline Kangogo's body after being removed by officers from the bathroom where she was found dead
Image: BY MATHEWS NDANYI

Did police constable Caroline Kangogo shoot herself dead or was she killed by unknown persons? That remains the big question even as her family prepares to bury her.

A team of homicide detectives from Nairobi on Saturday arrived in Elgeyo Marakwet to probe the circumstances leading to her death.

Kangogo’s body was found in a bathroom at her parent’s home at Nyawa village in Tambach division of Elgeyo Marakwet on Friday.

Her body is lying at the Iten county referral hospital awaiting an autopsy.

Family members said she may be buried in the course of the week.

It’s the position of the body, the gun in her hand, the kind of injury on the body and the flow of blood in the room that raises questions about how she died.

Elgeyo Marakwet county commander Patrick Lumumba who led the team of officers to the scene said they are treating the death as a suicide case.

“We are investigating the matter further,” Lumumba said.

The detectives will probe how Kangogo avoided arrest for almost two weeks only to be found dead.

Kangogo had been on the run for 11 days.

Her father Barnaba Kangogo and mother Leah Kangogo did not see her.

“I was going to take a shower only to stumble on my daughter’s body inside. I was shocked”, she told the police at the scene.

Lumumba said no one heard the gunshot that allegedly ended Kangogo’s life.

He said Kangogo shot herself through the neck.

One bullet was recovered at the scene among other items including her mobile phone.

Some experts questioned how Kangogo could shoot herself and the gun remain on the hand while her legs were in a relaxed position and that there was no splashed blood at the exit of the bullet.

One of her hands was in the pocket of her yellow jacket and experts argued that there appeared to be no sign of a struggle as she died.

Some Iten residents claimed to have seen her that morning as early as 5 am after which she allegedly boarded a motorcycle and headed home.

Experts also questioned the draft confession text messages found in Kangogo’s phone with claims that they may not have been written by her.

In the text messages, she explained her actions blaming her former husband who is a senior police officer and also lamented being frustrated by her family and a senior boss in Nakuru.

The confession notes allegedly authored by her emerged, hours after her body was found.

Kangogo who was described as a sharpshooter said in the messages that she suffered depression and lamented about her husband, whom she accused of philandering and neglecting her and the children.

The message appeared meant for her brother as she asked him and her parents to take care of her children because their father is too much into women.

Kangogo asked that she be buried at her parents’ home because her husband 'dumped' her.

She was a suspect in the killing of two men, including police Constable John Ogweno, in Nakuru on July 5.

She later allegedly shot dead Peter Ndwiga Njiru, 32, in lodging in Juja, Kiambu, about 200km from where the police officer died.

An autopsy showed Ogweno died of a haemorrhage.

Njiru's autopsy said he died out of bleeding from the head.

In the text, Kangogo did not show remorse for allegedly killing Njiru, writing he conned her Sh1.5 million.

She did, however, show remorse for allegedly killing Ogweno, asking for forgiveness from his family.

She said she was not supported at work and had to make several trips to the hospital due to her child’s asthmatic condition.