Proposals include additional criteria to test proficiency in English, the primary language in legal practice. 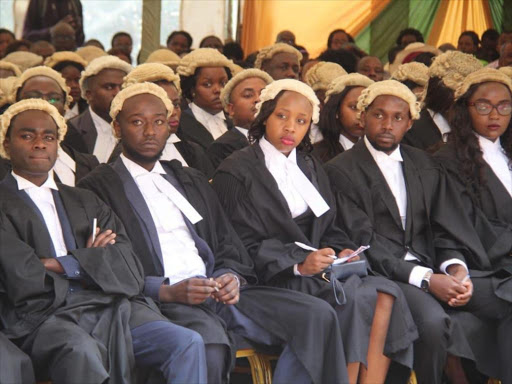 Lawyers admitted to the Roll of Advocates by former Chief Justice David Maraga at the Supreme Court
Image: FILE

The AG noted that the recommendations by the Kenya Institute of Public Policy Research Analysis will help address the current academic challenges at the Kenya School of Law.

The recommendations by KIPPRA include raising the entry requirements for admission to the Bachelor of Law degree.

Other major proposals include additional admission criteria to test proficiency in English as it is the primary language used in the practice of law.

This emerged during a retreat for the Kenya School of Law programmes in Naivasha after stakeholders, including the courts and Parliament, decried the low pass rates among the advocates.

In a speech read on his behalf by the CAS in State Law Office Prof Micheni Ntiba, the AG termed the recommendations as timely.

He said adequate government funding was critical to ensure the law school delivered effectively on its mandate.

“There is a need to establish and operationalise a structured loan or sponsorship scheme at the law school to ease the financial burden on students undertaking the ATP exams,” he said.

Kihara called for an increase in the number of lecturers and facilities at the school in the wake of the proliferation of universities teaching law and the high number of students.

“The services of the school should be decentralised to accommodate the high number of entrants to the ATP examinations,” he said.

He at the same time decried the high number of lawyers located in urban centres against those in rural areas, terming this as unfair to litigants.

“The country has over 15,000 lawyers but the distribution of the number of practicing advocates has favoured urban areas as opposed to rural areas,” he said.

A member of the board of directors in the school, Jacqueline Manami, admitted that the legal sector had faced several challenges over the past few years.

She identified the poor performance of students taking the bar examination as the major one but was quick to note that the issue had been sensationalised in the media.

“It is important to clarify that the concept of “mass failure” at the school has been used out of context and created a bad impression,” she said.

Manami noted that the KIPPRA findings revealed that the manner in which the examination results were presented could create wrong impressions if not well-understood.

“The board is pushing for legislative amendments that will streamline admission criteria by synchronising the Kenya School of Law Act, 2012 with the Legal Education Act,” she said.