Deputy Governor announced 50% of the population, or 640,000 people, were facing starvation due to drought. 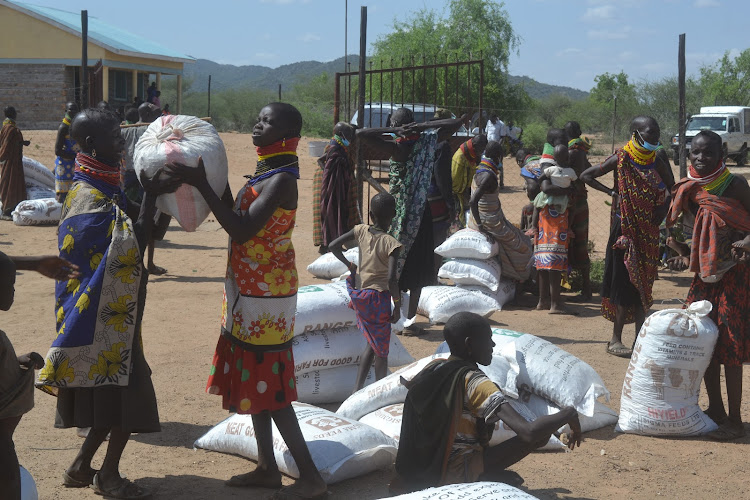 Pastoralists in Turkana county will receive animal food supplements donated by the Agency for Pastoral Development and the county government.

APAD director Samuel Kimeli said more than 3,000 families in Loima and Turkana West constituencies will benefit from animal food supplements to cushion them from drought that affected their livestock and livelihoods. APAD works especially with border communities.

Kimeli said the residents of Namoruputh, Loima subounty each received a 50kg bag of pellets as they awaited hay for their animals.

“We will work closely with Turkana county to build the resilience of communities through animal feeds distribution,” Kimeli said.

Chief officer for the pastoral economy Abdillahi Yusuf said they will partner with  NGOs in animal feed distribution.

Loima MCA Jackson Lowoi urged partner organisations to always plan early for drought intervention and not wait until animals begin to die due to drought.

“We experienced drought when all our water sources had dried up. We lost some  animals. It's a sign of hope that we received rain and vegetation is sprouting. We thank the county and partners to improve the strength of our animals," he said.

The county department of livestock said 4,193,462 goats and sheep were at risk of starvation.

Agriculture and pastoral economy executive Philip Aemun said the drought had forced herders to migrate to new areas in search of water and pasture, making them vulnerable to diseases, hunger and insecurity.