Maasai woman leads conservancy in Mara to benefit the vulnerable

• At Nashulai Conservancy, Noonkiba sits on the powerful land control board. She also owns land in five conservancies dotting the Mara.

• She has seven acres in Nashulai, six acres in Siana, 80 acres in Pardamat among other conservancies. 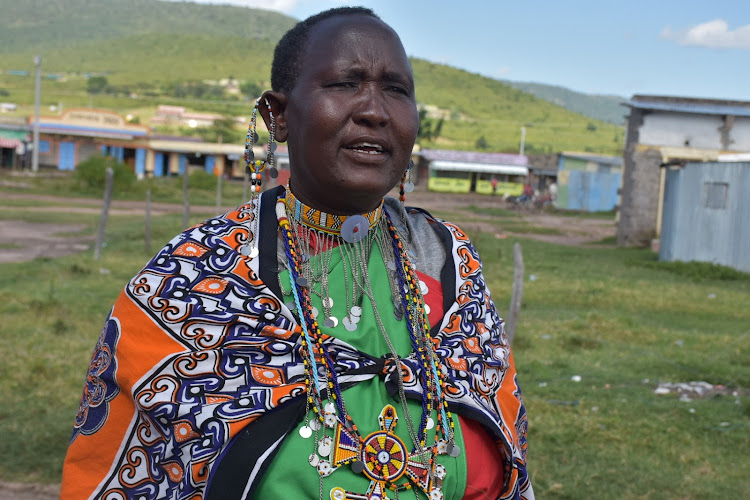 Nayiare Noonkiba does not stand out from other Maasai women in Mara North despite the powerful position she holds in her community.

An owner of huge swathes of land, a leader and a women's rights advocate across the Mara conservancies, Noonkiba's influence in her community is unmatched.

At Nashulai Conservancy, Noonkiba sits on the powerful land control board. She also owns land in five conservancies dotting the Mara.

She has seven acres in Nashulai, six acres in Siana, 80 acres in Pardamat among other conservancies.

Her rise to the top has been gradual, overcoming entrenched patriarchal systems and low literacy levels among Maasai women to take up a leadership role.

"It has not been easy. We have, however, moved one step at a time," she says.

"Women are very happy about conservancies as they get a salary while the youth get employment," she says.

Noonkiba said women were in the past sidelined in property ownership, with the men given control of family investments.

"There are cases where land is sold when widows have been left by their husbands. Children when they grow up sell land without the consent of their mother," she says.

To address this, Noonkiba said they are trying to regulate land sales.

"Women need to be consulted before the land is sold," she says adding that the move disadvantages women.

Nailepo Kireto also sits on the landowners' committee in Mara North alongside five other women.

"We were allowed to make decisions recently. Many things have now changed," she says.

Kireto said they are involved in making decisions about school bursaries and in managing the security of wildlife.

"We are also involved in day to day running of conservancies," she said.

Kireto said there are very many benefits accruing from the land lease.

The Maasai Mara ecosystem is home to approximately 25 per cent of Kenya’s wildlife.

It hosts more than 95 mammal species besides being a recognised as an Important Bird Area with 550 bird species.

Presently, about 70 per cent of the wildlife lives outside the gazetted conservation area in the Maasai Mara National Reserve.

For the last 30 to 40 years, however, there has been a rapid and unequal socio-economic development in the Mara, due in part to a history of land grabbing, poor governance, corruption and a lack of transparency.

A series of failed land management and ownership regimes, including communal land managed as group ranches, has left a legacy of distrust and a lack of community cohesion.

After the failure of group ranches, the land was subdivided among members, with a few powerful individuals amassing extensive benefits, while the majority of landowners remained disempowered and disenfranchised.

The move has seen a proliferation of land subdivision, destroying wildlife habitat and migration corridors.

The Maasai have eked their living mainly from livestock raised on communal rangelands, which in turn maintains habitat for wildlife.

At Olderkesi Community Conservancy, a group of 15 women has started beekeeping and table banking as means of empowerment.

Florence Ntaiya, 26, said they started table banking in 2019 as one way of empowering women.

"We are planning to sell the goats we bought before buying tents and chairs for hire," she said.