House prices to be paid through mortgage of between Sh1.5m and Sh4m. 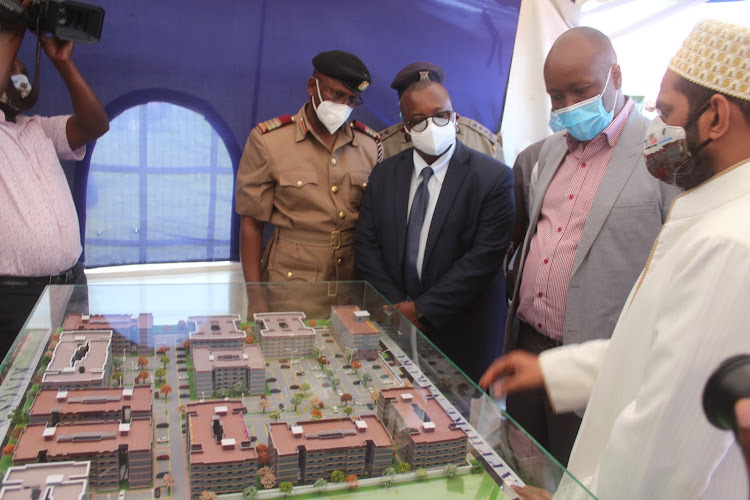 The State Department of Housing and Urban Development has launched the inaugural Public-Private Partnership in providing affordable housing for the middle and low-income class in Nakuru county.

Principal Secretary Charles Hinga said the project in Nakuru’s Bondeni Estate was purely being funded by a private developer with the government only providing the 7.75-acre piece of land where the 605 units will be constructed under the Affordable Housing Program (AHP).

He observed that unlike in Nairobi’s Park Road Construction Project where the State gave the land and financed the construction, the construction of Kings Sapphire in Nakuru was purely being financed by Kings Developers Properties.

“Government has transferred land to potential homeowners so that after completion, the developer will not charge buyers the land value,” said Hinga who was accompanied by Governor Lee Kinyanjui and County Commissioner Erastus Mbui.

He said through PPP, the cost of financing had been cut at so many levels including reducing the unnecessary processes through which a lot of time value is lost.

The Bondeni Housing Project in Nakuru is a joint venture between the private sector developer and the State Department for Housing and Urban Development.

The project has 605 housing units, made up of one-bedroom, two-bedroom and three-bedroom apartment units that will be completed within 18 months.

Hinga observed project demonstrates the government’s commitment to delivering affordable housing which is one of the Big 4 Agenda priority areas.

He added that besides land, easier processes the developer was also getting tax breaks and the benefits will trickle to the public who will buy the houses and a much lower cost.

The PS said the housing in Nakuru were part of the larger Big Four Agenda to deliver 500,000 houses for those in lower-income segments.

The prices of the houses which can be paid through a mortgage will range between Sh1.5 million and Sh4 million.

In the park Road project the government has provided the mortgage for civil servants who include the police, through AHP, the government want to ensure that even the lowest income earners own homes,” he said.

He added a similar thing will be done in Nakuru and urged locals to come together, invest and ensure that benefits.

“Homeowners will be expected to live in their houses and will not be allowed to sell before the lapse of 8 years to avoid speculation on these units,” he added.

Hinga urged the developer to ensure Small and Medium Enterprises in Nakuru also benefit from the project by buying building materials such as doors, grills and windows from the Jua Kali sector.

He cited the Park Road project where the government impressed upon the Chinese contractor to ensure that they did not import doors and other items that could be locally sourced.

Governor Kinyanjui AHP was multi-pronged because, besides providing affordable housing to the people, it was also saving agricultural land which was being quickly consumed by upcoming estates.

He noted that people were investing in buying plots and building houses in Njoro, Molo, Bahati, Gilgil and Subukia thus quickly fragmenting farmlands.

“Developing horizontally was taking up agricultural land and thus the need to utilise the vertical space,” said Kinyanjui.