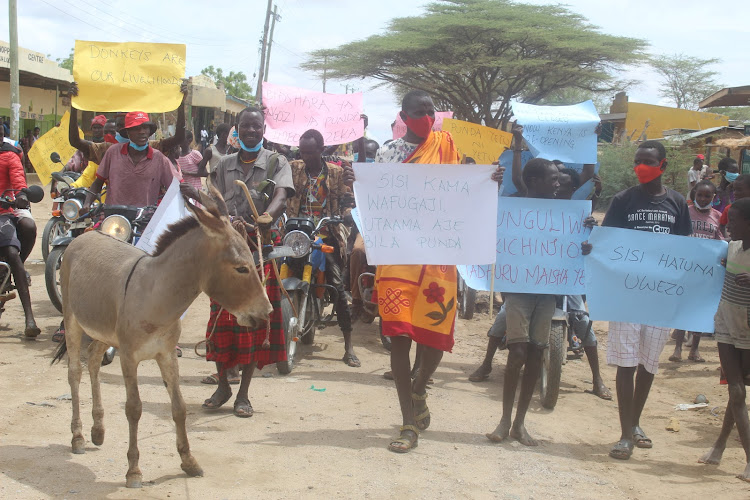 Pastoralists in Turkana county have protested against a ruling by the High Court that lifted the ban on the slaughter of donkeys.

The donkey owners say the reopening the slaughterhouses is a threat to the animals they depend on for survival.

Walter Lochumi, a member of the Donkey Owners Association and resident of Loima subcounty, termed the ruling as a plague to pastoralist communities.

“We depend on donkeys for transportation but since the Silzah abattoir came to Turkana, many donkeys have been stolen and slaughtered, their meat and hides exported to China for traditional medicine and cosmetics,” Lochumi said.

“We don’t want slaughterhouses to be opened. A donkey is a very important animal in our community. When Silzah started to operate, we learnt that our donkeys were depreciating and we engaged the partners to push for the ban and the government welcomed our grievances.”

Maxmillah Akai said they are a pastoral community and they depend on donkeys for their movement and the reopening of the slaughterhouses is a blow to them.

“We use donkeys as means of transport when moving from one region to another. If the High Court can rule in favour of slaughterhouses to finish our donkeys, who is going to help us?” she posed.

“We depend on donkeys. There is no way we can allow the decision of the High Court for the reopening of the slaughterhouses,” he said.

The court lifted the ban on the slaughter of donkeys on Thursday after the state failed to respond to an application challenging the legal notice.

“The government has failed to sufficiently defend this case and this court quashes the Legal Notice 63 of 2020 as it violates the rights of Star Brilliant,” Justice Richard Mwongo said.

He added that the state’s legal notice violated the rights of Star Brilliant, the petitioner.

In February 2020, Agriculture CS Peter Munya imposed a ban on the slaughter of donkey due to its dwindling numbers.

As a result of the court ruling, owners of Star Brilliant, Goldox Kenya (Mogotio), Silzha (Turkana), and Fuhai (Machakos) can resume their operations. The four abattoirs slaughter at least 1,000 donkeys every day.

"Donkeys are poor breeders with high abortion rates.  They have a gestation period of 12-14 months calving at an interval of one foal in three to four years unlike a cow that gives birth every one year," Ojwang said.

Ojwang said a study by the Kenya Agricultural and Livestock Research Organisation in 2019 showed that the annual mean rate (5.1 per cent) of donkeys slaughtered was five times higher than the annual donkey population growth rate (1.04 per cent).

He said a projection on the number of donkeys slaughtered implied that by 2023, the donkey population will be depleted, holding all factors constant.

The donkey population reduced by 789,258 in three years after the opening of the first donkey slaughterhouse in Kenya in 2016.