• High mortality rate mostLY in calves and mature animals; symptoms include oral, foot and udder lesions, as well as secondary infections such as pneumonia and mastitis. 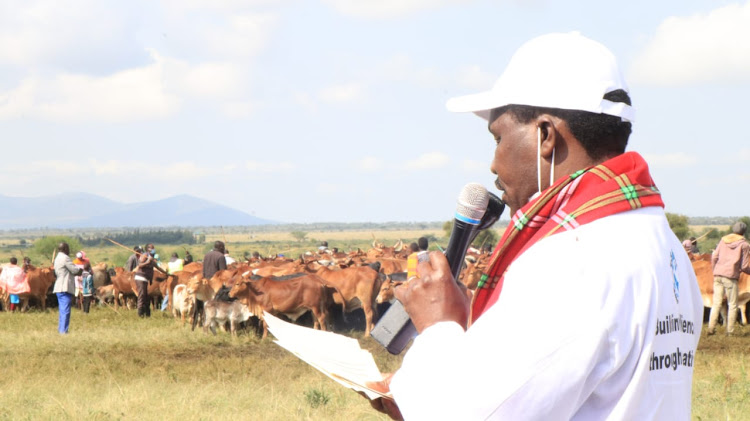 Narok county has been experiencing recurrent outbreaks of foot-and-mouth disease since February.

Agriculture CS Peter Munya said sporadic cases have been reported in areas neighbouring Transmara. He spoke on Monday when he appeared virtually before the Senate Agriculture committee.

Munya said the disease is mostly affecting cattle, with more severe effects on dairy cattle. High mortality is mostly reported in calves. Mature animals present with oral, foot and udder lesions, as well as secondary infections such as pneumonia and mastitis.

Munya said indigenous breeds such as Zebus and Sahiwal crosses are asymptomatic but can transmit the disease to susceptible improved herds.

“Some livestock breeding farms in Transmara have been severely affected by the outbreak. At Keyian farm the outbreak was reported in February. It keeps both dairy and beef cattle and is a breeding farm for pedigree Sahiwals for Kalro," the CS said.

The dairy herd was severely affected by FMD, Munya told the Senate.

When asked about the measures to contain the disease, the CS said the National Foot and Mouth Reference Laboratory at Embakasi has been receiving and processing FMD samples from the counties.

He said Narok has trained personnel to collect samples and submit them to the lab for analyses and confirmatory diagnoses before vaccination.

“Vaccination is ongoing and the ministry and the Narok county government have procured 110,000 doses of FMD form KEVEVAPI— Kenya Veterinary Vaccines Production Institute— through the Resilience Project,” he said.

Munya said this will help livestock farmers, especially those dealing with improved dairy herds, to easily access the vaccinations which has been a problem.

He said biosafety measures have been put in place in the region, including quarantines in Keyian to minimise spread of the disease to neighbouring farms.

“Affected animals are given supportive treatment, including use of magadi soda in cleaning wounds,” Munya  said.

In addition, KEVEVAPI and Narok signed an agreement whereby the institute supplies assorted vaccines worth Sh8 million to the county in FY 2020-21.

On January 29 director of veterinary services Obadiah Njagi raised concerns about the increase in the number of FMD outbreaks. He blamed them on poor management of livestock movement and very low vaccination coverage.

“There have been complaints in the last few months about FMD outbreaks in vaccinated herds, possibly because of divergent virus strains in the field or ineffective vaccines. This is being investigated so necessary corrective measures can be instituted,” he said in a memo to county directors of veterinary  services.

Pastoralists urged to sign up for free livestock vaccination

Several counties affected by foot and mouth outbreak Concern over lack of personnel in the county to deal with outbreak Veterinary department under ...
Counties
2 years ago
by AGATHA NGOTHO Science Writer
Rift Valley
04 May 2021 - 22:00