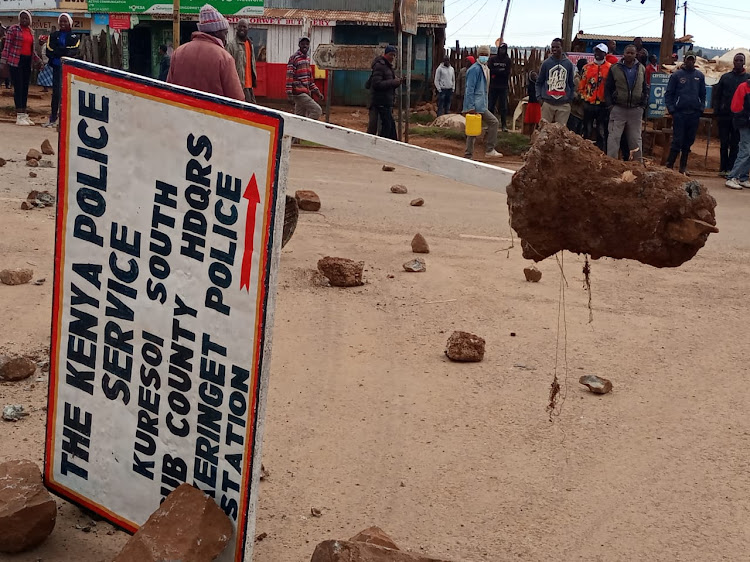 FATAL SHOOTING Residents uprooted a bill board belonging to Keringet Police Station during a protest in February this year. Residents are accusing the police in Kuresoi South of shooting a 17-year-old student at Kiptagich Secondary School
Image: LOISE MACHARIA

Police in Nakuru are investigating the fatal shooting of a 17-year-old in Kuresoi South.

The Form 2 student, Emmanuel Kipkoech succumbed to a gun-shot wound after allegedly being shot by police officers during a protest on Saturday.

Nakuru county police commander Beatrice Kiraguri said the matter had been handed over to Directorate of Criminal investigations for investigations.

“It is not clear who shot the fatal bullet because there were so many people during the protest,” said Kiraguri.

Kipkoech was among residents who were protesting the death of yet another person, a two-month-old infant, who had died at a road block along Kiptagich-Silibwet road along the Nakuru-Bomet border.

Parent of the baby are reported to have been taking the child to Tenwek Hospital  but the police who were enforcing containment measures imposed in Nakuru and four other counties refused to allow them cross to Bomet county.

The baby eventually died in the car after a long wait as the parents tried to plead with the police to let them through.

On Saturday, President Uhuru Kenyatta lifted the measures which had restricted movement into and out of  Nairobi, Nakuru, Kiambu, Machakos and Kajiado.

News of the infant’s death ignited protests among residents who barricaded the road using logs and stones while others lit bonfires.

A resident, Alex Kitur said police started shooting in the air in an attempt to disperse the protestors when one of the bullets hit the boy at the hip.

“The police were shooting in the air and in the commotion the minor was fatally injured,” he said, adding that the boy was taken to Keringet Sub-County hospital where he died while undergoing treatment.

The hospital medical superintendent Gilbert Toroitich said the victim had suffered massive internal bleeding. He said the boy had a bullet entry wound at the pelvis without an exit point.

“The bullet is still lodged in his body and a postmortem will be conducted to remove it and also ascertain the actual cause of death.

The body was kept at the hospital mortuary.

Police in Kuresoi South have been on the spotlight since mid-2020 when a video of two officers dragging a woman suspect on a rough road went viral.

The officers had tied the woman’s hands to a motor bike before dragging her along the road.

In February this year residents stoned a police vehicle and uprooted a billboard belonging to Keringet police station and barricaded roads to protest increased insecurity in the area.