GOVERNOR ON THE SPOT

Leaders say there are stalled projects in every ward 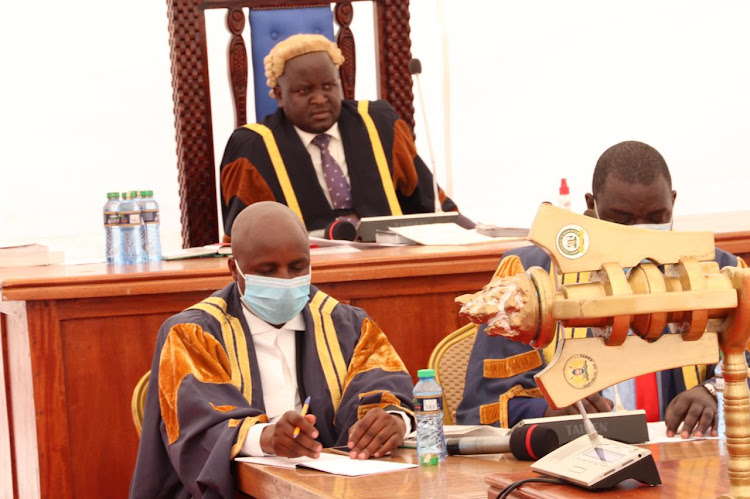 The MCAs led by Majority Leader Josphat Lowoi, said they are now forced to woo voters through attending funerals, harambees and weddings as there are no development projects to speak for them.

“Our people are still crying for important things like roads and water yet the county failed to use more than Sh3.5 billion last year. That is why we run to the funerals and harambees to be seen and remain relevant to residents because they no longer have faith in our leadership,” said Lowoi.

He accused county executives in Uasin Gishu of failing in their duties.

Lowoi said while the county fully utilises the recurrent budget, very little is done to ensure development projects are implemented.

The Assembly budget committee chairman Jonathan Ngetich accused the Executive of giving excuses on the failed or stalled development projects in all wards in the county.

“In every ward we have incomplete projects and we have to do something about it,” said Ngetich.

The MCAs spoke at the Uasin Gishu assembly after Mandago’s administration cancelled a plan to purchase the National Bank building in Eldoret at a cost of Sh570 million.

The Senate had last month directed the county to stop the purchase after it investigated the deal following a petition by residents opposing to the plan.

Residents petitioned the Senate through their Senator Margret Kamar saying the purchase was not conducted in a fair, equitable, transparent, competitive manner.

Following the cancellation, the Uasin Gishu County Assembly passed a supplementary budget which saw money meant to purchase the building re-allocated for other critical services.

Ngetich said the money should be used on important projects including improvement of roads. “The Executive agreed with the Senate and that is why we have the money for re-allocation in the supplementary budget.”

Mandago had last month said the county may abandon  the purchase plan and was only waiting for an advisory from the EACC.

Unconfirmed reports indicated that the EACC had also advised against the purchase. The county had argued that it needed the building for extra office space.

The Senate Finance and Budget committee chaired by Kirinyaga Senator Charles Kibiru last month termed the deal too costly to the taxpayer.

Residents of the county have hailed Kamar for pushing through the Senate their petition that led to cancellation of the plan.

“Kamar has helped the county save money that would have gone to waste. Now it can be used on priority projects,” said Paul Yator, a resident.

The Senate committee recommended that the county should construct an office block that will cater for its space needs on many of its available parcels of land in the town.

“We have noted what the Senate has said about the plan but we are now waiting for the advisory from the EACC before we decide on the way forward,” Mandago had said in Eldoret last month.

But the Senate committee which toured Eldoret early this year said the building is dilapidated, uninhabited and neglected, adding that the total cost of renovations and configuration would be higher than the cost of construction of a new office block.

“The county should stop any process meant to acquire the building and construct an office block in one of the lands which are under its ownership,” reads part of the report tabled by Kibiru at the Senate.

The committee established that out of the total purchase price of Sh570 million, the county will spend another Sh100 million on rehabilitating the building.

The committee noted the cost of construction of an office block should not exceed Sh500 million in line with the existing resolution made by the Senate.

Even though the transaction started in 2015, the county has yet to make any payment for the purchase of the property.

The sale agreement provides that the Sh570 million was to be paid in two instalments of Sh300 million and Sh270 million.

Mandago’s administration insisted that they carried out due diligence in October 2018 and valued the building at Sh568 million but that the negotiating team settled on Sh570 million as the purchase price without clear reasons for the increase in the price.

Part of the deal of the acquisition was that NBK would lease back about 2,200 square metres from the same building once it changed hands.

In justifying the purchase, Mandago had told the committee that the county departments and offices are housed in different locations within Eldoret town and this hampers service delivery given that service points are not in a central location.

He said the issue of constraint of office space has been experienced for a while and the office of the Controller of Budget in one of its reports had made recommendations that the county puts a mechanism in place to stop the continuous payments of rent.