Kenya has the largest diversity of fossil remains in Africa.

• The study was conducted by scientists from the National Museums of Kenya, and from South Africa and the United States.

• The rocks around where the fossil is believed to have been collected were also dated to around 2 million years.

New research has shown that a skull fragment found in Turkana in 1974 originated around 2 million years ago — 220,000 years more than first believed.

The discovery by scientists from Kenya, the US and South Africa solidifies Turkana's claim to being the cradle of modern human beings.

The origin of the Homo Erectus was always hotly contested, with some studies suggesting origins in Georgia (Asia) or South Africa.

The new study on the 1974 skull fragment found in East Turkana and a survey on the area where it was collected shows Turkana is the first place where the early human being walked.

The study was conducted by scientists from the National Museums of Kenya and others from South Africa and the United States.

Homo Erectus is the oldest human ancestor, with more human than apelike characteristics. It was not the first hominid to stand up, but it started showing significant brain growth and evidence of tool use.

“KNM-ER 2598 (the Kenyan skull fragment) is key to anchoring the earliest evolution and dispersals of Homo erectus,” the scientists say in the study published in Nature Communications journal. 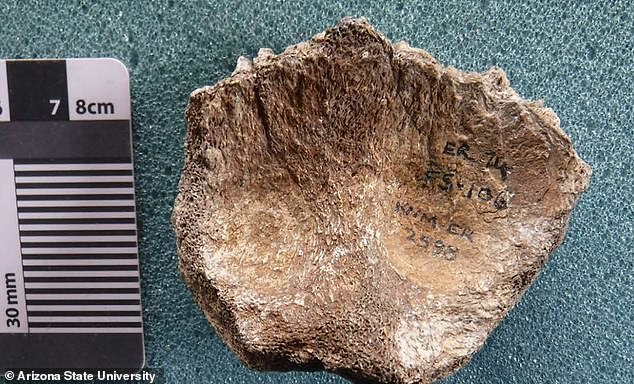 A skull fragment belonging to a Homo erectus found in 1974 dates back two million years, deeming it the oldest specimen on record.
Image: HANDOUT

The Kenyan skull bone was first found east of Lake Turkana in 1974 when GPS did not exist, so scientists at that time marked the location by putting a pin on aerial photos.

Although it was initially dated 1.78 million years, some scientists claimed it could not have been that old. Inconsistencies also emerged between the fossil and where it was supposedly collected.

This is what led the current team of scientists back to Turkana.

“We used Google Earth imagery to approximate the geospatial location of KNM-ER 2598 in geographic coordinates from historical aerial photographic records housed at the National Museums of Kenya,” said Ashley Hammond, a US paleoanthropologist who was part of the team.

The team also found foot and pelvis fossils that might have been from the same Homo erectus.

The rocks around where the fossil is believed to have been collected were also dated to around 2 million years.

“Homo erectus was around for almost two million years and lived alongside several other hominid species at different periods of time,” Ashley said.

The National Museums of Kenya praised the finding.

"This kind of renewed collaboration not only sheds new light on verifying the age and origin of Homo erectus but also promotes the National Museums of Kenya's heritage stewardship in research and training," said Emmanuel Ndiema, the head of archaeology at the NMK.

Kenya has the largest diversity of fossil remains in Africa.

“East Turkana is one place where we find multiple hominid species overlapping, so this field location has the potential to provide more information about how these species coexisted sympatrically. I’d love to know more about how Homo erectus interacted with other hominids,” Ashley added.