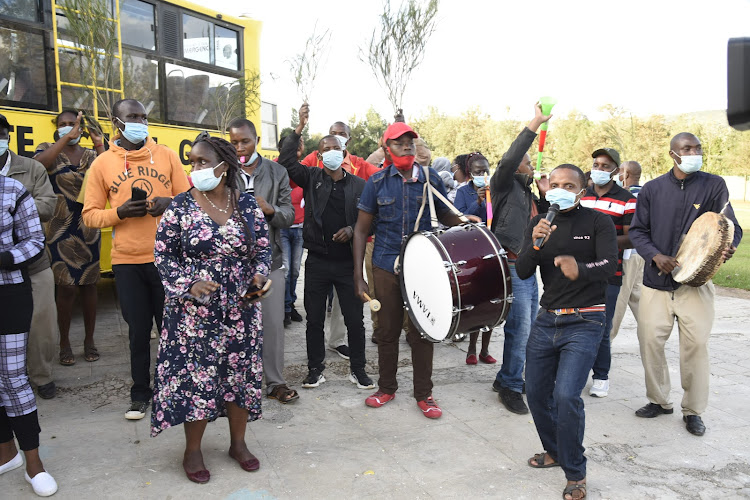 Teachers and pupils of St Peters Elite School in Gilgil subcounty are in a celebratory mood after 35 KCPE candidates at the institution scored above 400 marks.

There was pomp and ululations at the school as the community celebrated the success.

The top pupil at the school, Nicole Ongweso managed to score 419 marks closely followed by Naitutae and Melody who scored 416 marks each as Jane Makena got 415 marks.

Another duo, Daniel Macharia and Abigael Njeri tied at 411 marks as Shirleen Wanjiku and Felicia Simi managed 410 marks each.

Ongweso thanked her teachers and parents for their moral, acadmic and financial support throughout her eight year journey in Primary school.

"I was looking forward scoring a good grade in high school to enable me undertake a course in engineering,” said an elated Ogweso who was accompanied by teachers, parents and fellow pupils who streamed into the school to celebrate the great performance.

She said candidates studied in groups and attributed the teamwork for the star performance in the exams that were done in in March for the time.

Ongweso said discipline, hard work and prayers had a role in her success.

St Peters Elite has been among the top-performing primary schools in Nakuru county among others which include Moi Primary School Kabarak, Molo Academy, Lions Primary and Moi Primary-Nakuru.

The pupils were among a million others who were to sit the national examinations at the end of last year but Covid-19 struck and disrupted the school calendar.

At Moi Primary School, a highly populated public school, the best pupil managed to score 427 marks with another 16 candidates at the institution manage to score above the 400 mark.

The excellent performance is despite the school having 298 candidates with five streams.

Moi Primary was in the top 20 public schools nationally and has been commended for its stellar performance despite the high number of pupils.