KCSE students to face law after sneaking into girls' dormitory

• Principal Secretary at the State Department of University Education and Research, Simon Nabukwesi said the government will take action against the 10 students.

• All the 70 candidates have been allowed to use the school’s boarding facility rescinding a previous decision by the management which had kicked the suspects out of the school only allowing them to come in to sit their papers. 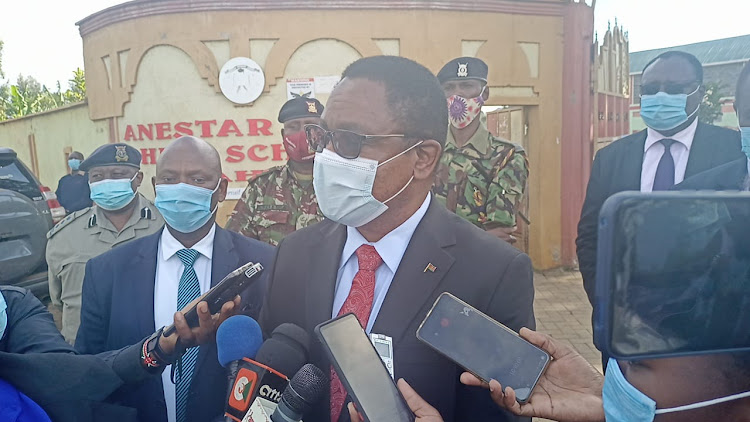 10 students who sneaked into a girls’ dormitory in Nakuru, will face the law once they finish writing their Kenya Certificate of Secondary Education examinations.

Principal Secretary at the State Department of University Education and Research, Simon Nabukwesi said the government will take action against the 10 students who sneaked into a girl’s dormitory in the dead of the night on Thursday last week.

Speaking in Nakuru on Monday, the PS maintained that the law will take its course once they finish their exams which are scheduled to end on April 21.

The 10 students were arrested after they sneaked into their sister school on Thursday night with another 60 boys managing to escape.

All the seventy candidates have been allowed to use the school’s boarding facility rescinding a previous decision by the management which had kicked the suspects out of the school only allowing them to come in to sit their papers.

The management had declined to accommodate the suspect in its boarding facility following the incident.

“They are sitting the rest of the papers inside the school and spending the night with the rest of the students as usual,” Nabukwesi, who opened the exams papers in Nakuru County on Monday morning before touring the two schools said.

The schools are among several high performing primary and secondary schools in Bahati sub-county.

Nabukwesi said the government had increased surveillance on the two schools which shall be sustained to the end of the ongoing national examinations.

He revealed that the county security team and education directorate reviewed the decision to allow the students back to school but enforce higher monitoring.

The PS was accompanied by top Nakuru county security chiefs during the tour of the two learning institutions.

He said candidates found engaging in unbecoming behavior during the ongoing KCSE exams will miss their certificates of good conduct.

Nabukwesi said that the government was taking the incidents seriously to ensure the law was followed.

He was however quick to that the affected students will get their Good Conduct Certificates once they satisfy security agencies that they have reformed.

“Investigations are still on to ensure staff at the school who failed to perform their roles as expected also have their day before a court of law,” he said.

He observed that there was no way such an incident would have happened under the watch of the management.

“It is evident there was a lapse in taking responsibility for the learners and those who didn’t play their part will also bear personal responsibility,” Nabukwesi said.

The PS warned that harsh action shall be taken against schools where such incidents will be reported including permanent closure and withdrawal of their licenses.

Nabukwesi said schools that failed to inculcate good morals in its learners shall be shut down to serve as a lesson to others.