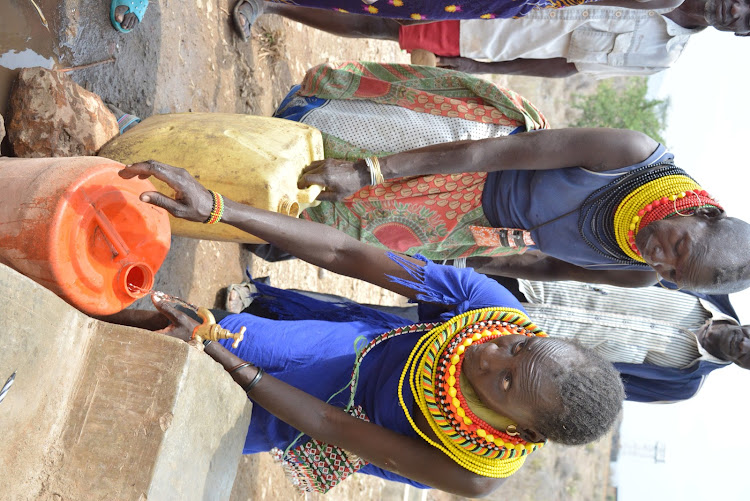 Water A group of women from Orum in Turkana county fetch water from a borehole drilled in the area by donors to address years of suffering for the residents majority of whom are pastoralists. Cases of diarrhea have dropped sharply following the drilling of the borehole the first ever since independence.
Image: George Murage

Malnutrition and diarrhoea have dropped sharply in one of the villages in Turkana despite the drought ravaging the semi-arid county.

Tens of families from Orum village, hundreds of kilometres from Lodwar town, have reported a drop by 70 per cent in diarrhoea cases due to the provision of water after over 50 years of waiting.

This has been achieved through provision of water by Lotus Kenya Action for Development Organisation and Welthungerhilfe, which is funded by German Federal Ministry for Economic Cooperation and Development.

According to Dennis Esekon Lokitare, the resilience and development programme manager in Lokado, water had been the main problem facing residents.

He noted that this had been worsened by the ongoing drought, noting that the borehole in Orum had come in handy in addressing the current challenges.

“This area has suffered from acute water shortage since Independence and the provision of water has addressed the issues of sanitation and reduced the distance locals walk in search of water,” he said.

Lokitare added that for years women had to walk for tens of kilometers in search of water, exposing them to bandit attacks.

“This has changed after we managed to strike water and the borehole is now a potential point which has been used to unify pastoralists seeking water and pastures,” he said.

The medical officer in charge of Orum dispensary Justus Ekai noted cases of diarrhea had dropped due to the provision of the water.

He said that in the past, women seeking delivery services had to come with their water due to the challenges and hardship in the area.

“Since the drilling of the borehole we have enough water to serve our dispensary and cases of diarrhoea have gone down due to improved sanitation,” he said.

He added that locals who for years relied on livestock were diversifying to farming, a move that had seen their nutrition needs addressed.

Teacher Andrew Eskon from Orum primary narrated how they once lost a pupil who had gone to fetch water in a borehole when the walls collapsed.

“We prayed to God and our prayers have been heard through the provision of water and students are now clean unlike in the past,” he said.

This was echoed by Teresia Iyanei who said that for years they had to walk for hours in search of water for their homes and livestock.

“We now have enough water thanks to Lokado unlike in the past when we had to spend a whole day in search of water for our families,” she said with a smile.