Security officers on Monday engaged family members, relatives and mourners of Nakwamekwi, Lodwar Turkana in a gun drama during a burial. https://bit.ly/3rVeRfW

Security officers on Monday engaged family members, relatives and mourners of Nakwamekwi, Lodwar Turkana in a gun drama during a burial.

The bone of contention was who should be allowed to bury Engineer Lawrence Lolii between the late first wife and the second wife according to the marriage rituals of Turkana.

On Sunday, Esther Kiyonga, the second wife to the late Lolii ferried the body from Eldoret Hospital mortuary Sunday and took it at Lodwar police station.

On Monday the security team escorted the body to Nakwamekwi village for the burial.

Tension was high at Nakwamekwi village as the family of the late first wife, relatives and locals didn’t want the body to be buried at the home of the second citing that’s against the Turkana marriage rituals.

The security officers had to use live bullets and tear gas to disperse the bereaved family members of the first wife, relatives and locals to forcefully bury the deceased without following the church protocol of burial.

The bereaved family of the first the late first wife and the second wife have been in a tussle over who is supposed to bury the body of their loved one, Engineer Lolii who passed on under unclear circumstances a week after his traditional wedding.

The late Lolii, 54, who worked with Turkana County Government, had married two wives, blessed with six children but he later lost his first wife and survived with the second wife.

He passed on March 1 in Eldoret and since then family of the late first wife and second wife have been struggling to get the body to bury him.

Elizabeth Angela, sister to the late Lolii said on February 28, her brother was healthy and travelled from Lodwar to Eldoret for official duties accompanied by his second wife before his death.

Angela said the family had to travel and seek a court order from Eldoret Law Court for the postmortem and to restrict anyone from removing the remains of the late for the burial.

Their request was granted by the court.

She said while they were still sourcing funds to enable them to conduct the postmortem, the second wife Esther Kiyonga took the body from Eldoret Hospital Mortuary alleging that she also had court orders to bury her husband.

“We took our court orders to Lodwar OCS David Mutegi and we explained to him that my brother had married two wives and according to the Turkana marriage rituals the body is supposed to be buried at the home of the first wife under a cattle shed. My brother had performed a traditional wedding to his late wife to have a right to own children, then a week after he succumbed. So burying his remains away from first wife home it’s a bad omen to the family according to Turkana traditional culture,” she said

She said OCS Mutegi did not hear their requests instead he said they are executing court orders to help the second wife to bury her husband. 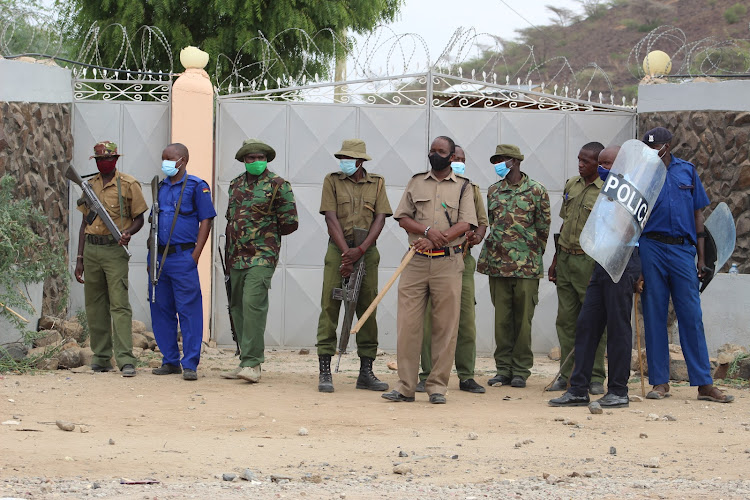 According to the court documents seen by the Star shared by Turkana Central Sub county police Commander David Mburukwa, the court didn’t authorize or confirm that Esther Kiyonga, the second wife to bury Lolii.

When Mburukwa was reached for comment at the scene he said it was a sensitive matter and they were executing court orders.

"Upon this matter coming up for a ruling of an application dated 9th March, 2021 coming up before Magistrate identified as  B. Kiptoo on 23rd March,2021 virtually, and upon analysing arguments from both sides of the divide, noting that superior courts have come out strongly on this issue. Its herby ordered that the application dated 9th March 2021 is hereby struck out and the parties being close family members and in an effort to bring cohesion amongst them, each party to shoulder own costs,” the court order stated.

However among the documents shared, Alwang’a and Company Advocates on behalf of the second wife stated that matter was struck out and requested the Hopital to releaese remains of the late Lolii for the second wife for the burial.

Daisy Lolii,28, first born of the late Lolii, now an orphan said that she couldn’t  be allowed to see the remains of her father and bid him goodbye.

“Dad we were so proud, we were your kids and now even bearing your last name became so hurting when the police couldn't even allow us see you for the last time not even come near your coffin.... Daddy I believe heavens knows you watching over us and that only is enough for us....I call you God of orphans just fight for us. We don't have money to buy the world, but we have you God. Rest well our World Mr Lawrence Lolii,” she said. 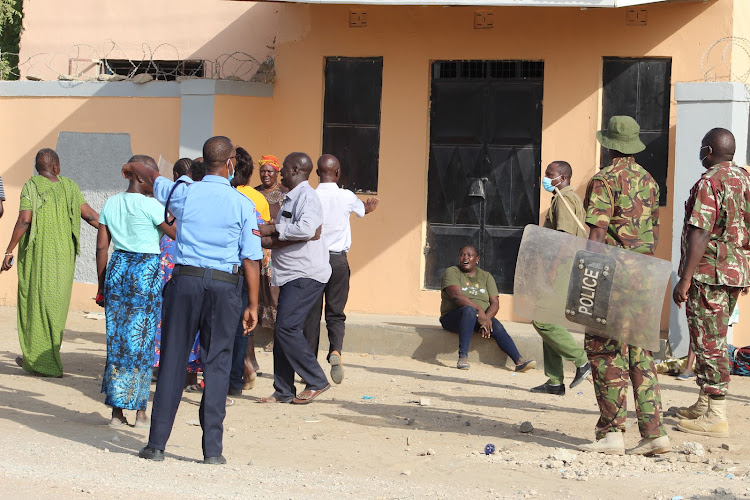 The security officers disperse mourners at nakwamekwi village, Lodwar to enable the second wife to bury her husband. The bone contention was on who is supposed to bury the husband between the first wife and the second wife according to the Turkana marriage rituals
Image: HESBORN ETYANG

Lazurus Loyonae, a former Lodwar Councilor now an Elder said according to the Turkana traditional culture when a man dies he is supposed to be married in his home at the cattle yard.

“We are shocked with how police officers engaged family, relatives and mourners in a gun drama to help the second wife to bury he late Lolii. Police officers used live bullets and teargas to disperse them. There was no dispute, the burial was to be conducted in Turkana traditional form but it was interrupted,” she said.

He said the family of the first the first needs justice to be done so that the body can be exhumed and buried in the traditional culture of Turkana to avoid badomen that can lead to death of the family members.

The second wife of the late Lolii was not reached for comment as she didn't respond to our calls and messages.