Operation launched in Laikipia to flush out illegal herders, bandits 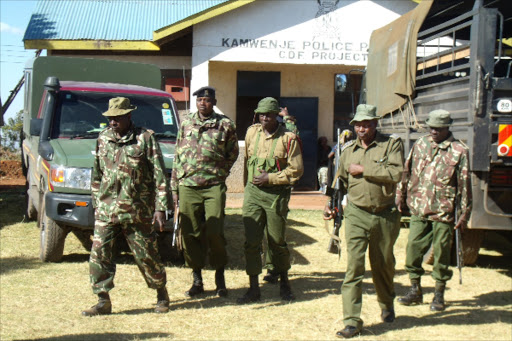 Security officers in Laikipia county will from Thursday mount an operation to flush out illegal herders, cattle rustlers and bandits suspected to be from neighbouring Isiolo, Baringo and Samburu counties.

“We have been provided with the necessary equipment to carry out the operation. These vices will be a thing of the past because we don’t want these people who have been giving us sleepless nights," Nyameti said.

Migrant herders have been illegally invading private farms, ranches and conservancies in search of pasture while armed bandits have been stealing livestock, killing and maiming people.

Nyameti said the security agents were intent on seizing illegal arms in the hands of bandits.

He urged local leaders to support the government in the exercise. He did not indicate how long it will take.

Last week, leaders in the region blamed the government for not providing security to residents suffering from bandit attacks and livestock theft.

This was after another young man was shot dead at Muramati village in Laikipia North subcounty, bringing to 10 the people who have been killed by armed raiders in the constituency.

Led by The Service Party leader Mwangi Kiunjuri, the leaders who included Laikipia North MP Sarah Lekorere and four MCAs condemned the killings and said the government had failed to protect the lives and property of residents.

Kiunjuri said the government was busy sending security officers to block rallies held by Deputy President William Ruto and his allies while it could not even provide guns to police reservists in Laikipia.

Speaking during the burial of 41-year-old Ndirangu Kamande who was shot dead at his home in Muramati, Kiunjuri said it was high time people from the region were assured of their security by the government.

The former Agriculture CS noted that the government withdrew police reservists from the region without disarming bandits from neighbouring counties and this has been the major problem.

Lekorere said she had already taken a petition to Parliament to direct the government to reintroduce the NPR in the region since this was the only way the people could be safe.

She said residents continued to die due to illegal firearms in the hands of bandits.

Post a comment
WATCH: The latest videos from the Star
by ELIUD WAITHAKA
Rift Valley
21 October 2020 - 22:00
Read The E-Paper