The plants will provide direct markets, cut out middlemen and increase farmers' income.

• The value-addition plants will produce different grades of milk, butter, yoghurt, cream, sour milk and other products, as well as tinned mangoes, condiments and mango juice.

• They will buy directly from farmers and cut out middlemen who exploit them, thus increasing incomes. They will provide jobs and reduce cattle rustling.

Governor John Longyangapuo received a feasibility study report on the plants and said it would be a road map for development.

“The two factories are blueprints of my manifesto since my government is committed to increasing income at household level,” he said.

The county produces large quantities of milk and mangoes but farmers are exploited by middlemen who buy at throwaway prices.

West Pokot milk is famous for its very high fat content and building a processing plant will enable the county to tap its dairy potential.

Longyangapuo said farmers have been exploited by middlemen for too long and it's time to save farmers from the losses.

“Farmers cannot decide the price of the milk. The decision is left in the hands of middlemen,” he said.

He said the county has the potential to produce more than 50,000 litres of milk a day.

During droughts the county has the potential to produce over 38.1 per cent of that amount and 40.2 per cent during peak season, the governor said.

“The plant will offer employment to our youths who are idle and, hence, reduce outdated cultural practices [cattle rustling]," the governor said.

The county is improving dairy cattle breeds to increase production. “We don’t want the factory to lack milk supply so we have been improving our breeds beyond indigenous breeds," the governor said.

On mango farming, Longyangapuo said the county has been incurring huge losses as most produce rots on farms.

“Our farmers have been exploited by traders from outside the county who decide prices and take advantage of farmers," he said.

The feasibility studies were carried out by Kenya Industrial Estates. The reports were handed over by KIE managing diretor Parmain ole Narikae.

Narikae said the county has the potential to sustain the processing plants, reducing poverty and increasing household incomes. 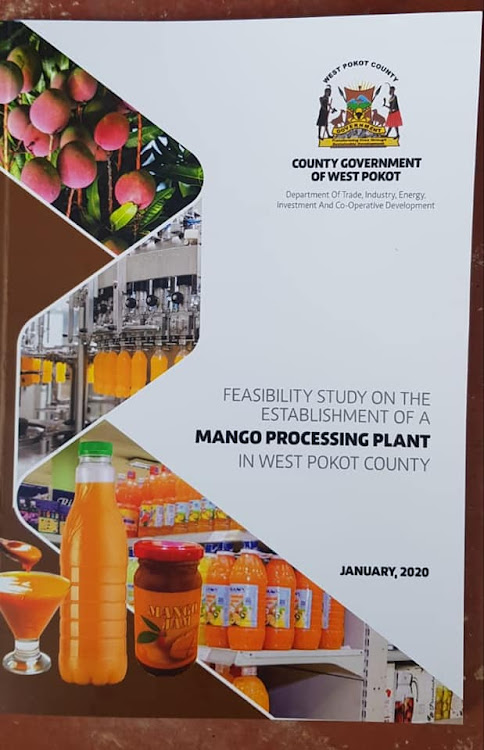 Dairy and mango farmers welcomed the plan to process their milk and fruits.

“During the rainy season our milk gets spoilt in our hands since the roads are impassable and we cannot deliver milk to the cooling plant on time,” farmer Peter  Alukulem said.

He said they have been selling milk to a processing plant in Central Kenya and cannot decide the price.

“Our prices are very low since the plant claims it spends a lot of money to transport our milk to the plant," Alukulem said.

Mango farmer Musa Tekelezi said for many years their mangoes have been rotting on farms due to the poor road network and inability to transport fresh fruit before it rots.