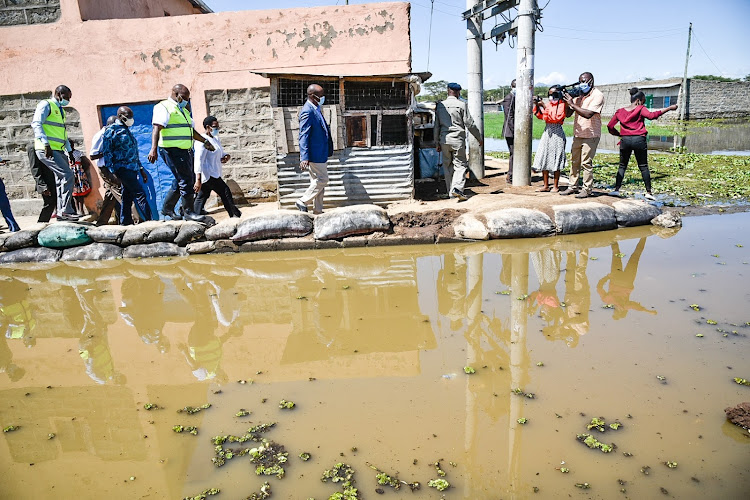 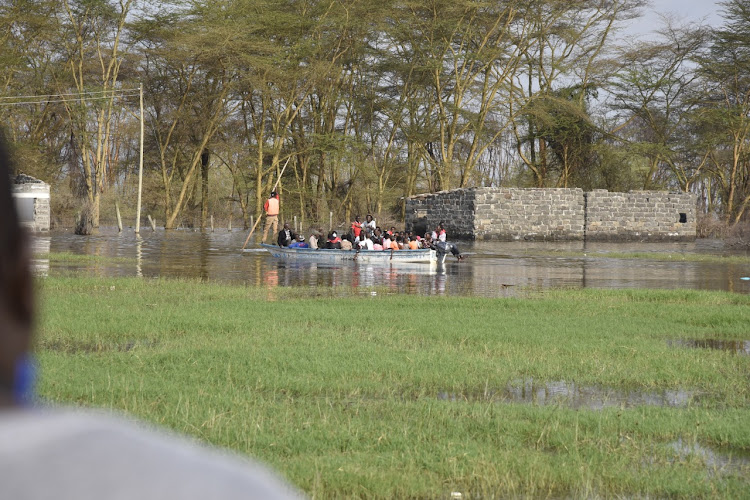 IT'S NOT ALL GLOOM: Nakuru residents enjoy a boat ride at a flooded section of Barut farm.
Image: LOISE MACHARIA

Thousands of Nakuru and Baringo residents have been displaced by water bodies bearing the same names even as scientists try to unravel why Rift Valley lakes are swelling.

They live in squalid hamlets after their homes, institutions and crops were claimed by the expanding lakes.

The swelling lakes phenomenon started a few years ago. Some scientists and environmentalists blame it on global warming and habitat degradation.

Seismologist Silas Simiyu says the rising levels of Rift Valley lakes is a result of tectonic movements of the earth's crust.

The saline Lakes Nakuru, Bogoria and Elementaita have experienced the relocation of their beautiful residents - the flamingoes - due to increased water levels which have interfered with their PH levels and algae production. (PH is the measure of how acidic/basic water is).

Flamingos feed on algae, which is increasingly becoming scarce in those lakes.

The reduced salinity has attracted fish like the tilapia. Fishing is a growing economic activity especially in Lake Nakuru whose shoreline is littered with mini eateries selling tilapia and accompaniments.

As late as last April, farming was the main activity on the south western neighbourhood of Lake Nakuru. Now the region is a favourite of fishermen who arrive from the lake with huge catches.

It is, perhaps, for this reason that Nakuru Town West member of Parliament Samuel Arama recently sought a ministerial statement on the plans the government has for families affected by the swelling lake.

The MP said fishermen had travelled from as far as Naivasha and Kisumu to fish on what was previously farmland.

“We want the fishing organised and regulated because currently, the fishermen are engaging in a very dangerous business to the extent of entering a highly secured sanctuary for three endangered animal species and hundreds of bird species,”  Arama said.

Fishing has, however, been temporarily stopped to allow for research and the setting up of guidelines.

The legislator was happy that scientists have found that the lake fish is fit for human consumption.

It is suspected that Lake Nakuru is expanding due to linkages with underground canals that are feeding it with water.

According to Arama, the national and county governments were addressing the matter with a view of compensating those displaced.

The county government has also formed a task force comprising meteorologists, hydrologists and experts in environment, energy, natural resources, land, housing and physical planning to assess the extent of flooding and the damage caused.

The task force will establish Lake Nakuru's highest watermark and beacon it. The team, which has already been to Barut Ward, will determine the extent the flood waters can reach and offer guidelines on future development.

The situation is similar to that in Lake Naivasha, which also burst its banks and swallowed chunks of flower farms, playing fields and residential areas.

The county government has been supporting hundreds of Karagita estate residents after they were rendered homeless by the swelling lake.

In Baringo, more than 30,000 people have been displaced and schools, hospitals, roads, beach hotels, farms and homes  submerged after Lake Baringo burst.

Senator Gideon Moi has promised to engage the National Government, the National Irrigation Authority and Geothermal Development Company for a lasting solution.

He says there is a possibility of digging a tunnel to drain excess water from the lake.