Government and the community have until September to resolve the issues.

• The financing was suspended two years ago after the Sengwer community petitioned the EU over unfair practices by the government.

• The Sengwers lay claim to ancestral land in part of the expansive forest which straddles Elgeyo Marakwet and Trans Nzoia counties. 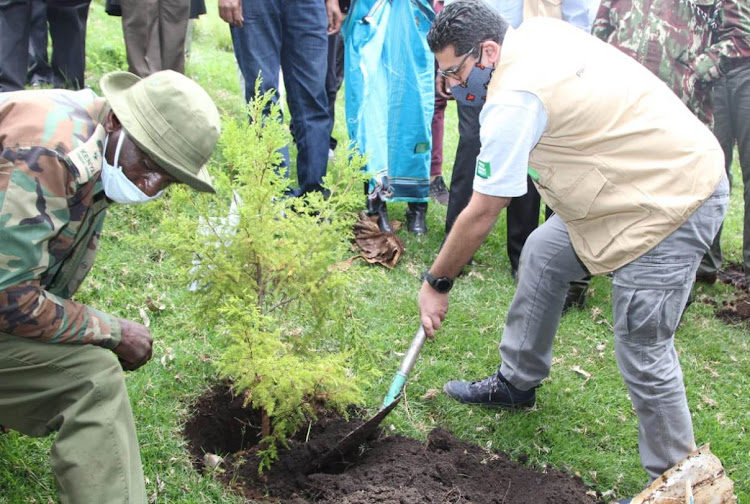 The European Union could cancel Sh3.5bn Embobut Forest conservation funds if the government does not resolve a human rights row with the Sengwer community.

The financing was suspended two years ago after the Sengwer community petitioned the EU over unfair practices by the government.

The Sengwers lay claim to ancestral land in part of the expansive forest which straddles Elgeyo Marakwet and Trans Nzoia counties.

EU envoy Stefano Dejak said Friday the government and the community have until September to resolve the issues raised over the project. The funds will be returned to the EU headquarters if no solution is reached.

Dejak said there was a need to come up with mutually agreeable solutions to enable the programme to proceed.

"By 20th September the funds will expire and will be returned to EU to cater for other programmes including helping member countries combat Covid 19," he said.

Dejak said that the Embobut Forest impasse had hampered a roll-out of the programme to 10 counties in Kenya.

The envoy spoke when he led a team from the EU to assess progress in the area. Also present was Governor Alex Tolgos.

The delegation that also included Environment PS Chris Kiptoo was in Maron area of Embobut to hear grievances from communities.

The envoy said the funds can help conserve the forest and assist local communities and there is an urgent need for a solution to the matter.

He said they want a commitment that no human rights violations would be meted out in the course of the programme implementation.

The EU also wants perpetrators of past killings and destruction of property during evictions in the forest to be brought to book. A community participatory approach to forest conversation should be adopted, he said.

"I know that all these issues may not be addressed given the little time left but we can put in place processes to address them," Dejak said.

The meeting was convened to resolve the stand-off to pave way for restoration of over 24,700 acres that have been degraded through human activities.

Embobut Forest is the biggest ecosystem in Elgeyo Marakwet county and has about 74,000 acres. Some 24,700 acres have been encroached on.

During the meeting, the Sengwer and Marakwet communities made submissions giving reasons why they blocked the funds.

Paul Kiptuga, chairman of Sengwer elders, demanded that the community be given three forest glades which they claim as ancestral land.

If the wish is granted, they will live in the areas and allow the conservation programme to proceed.

Kiptuga said they opposed the new EU programme because the Kenya Forest Service had previously been used to mete out human rights violations.

He said they had lost people in past evictions, others maimed and their property destroyed.

The elders said that the government gazetted their land as a forest in 1954 without their consent.

Elder Luka Kiraton said KFS has disregarded their role in the forest conservation yet both traditional and scientific knowledge can be used in the process.

Johnstone Labore, a former chief and a representative of the Marakwet community, said Embobut has seven natural glades that belonged to clans.

He said the glades were God-given for human use for their livestock adding that they had utilised them for ages.

The communities later handed over submissions to the delegation.

Governor Tolgos called for home-grown solutions to the issue and expressed optimism the communities would come up with a roadmap.

"What we have done today by coming to the ground is what I have always advocated for. I am now optimistic we shall find a solution," he said.

Area MP Kangogo Bowen proposed that the government degazettes part of the forest to settle indigenous communities and those living along the dangerous landslide-prone escarpments.