• Clashes left at least one man seriously wounded, one sand truck destroyed and a fence to a boma burnt down.

• At stake is a goldmine of sand being fought over by two groups from different wards. All sand mines have been closed and roads closed because of skirmishes.

by KURGAT MARINDANY Correspondent
sponsored by THE STAR KENYA None
Rift Valley
21 May 2020 - 22:00 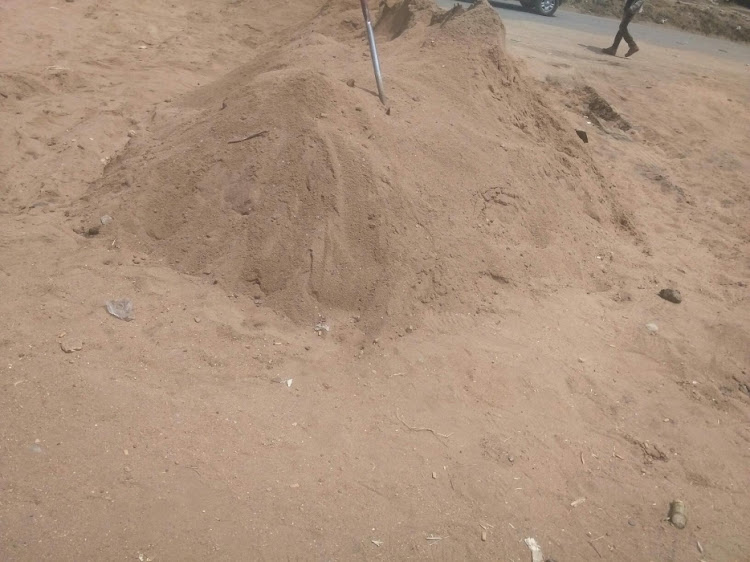 A standoff between MP George Sunkuyia and Governor Joseph Lenku is frustrating reconciliation between two groups fighting over precious 'golden' sand in Kajiado.

Clashes over the valuable construction resource have left one person seriously injured,  a homestead fence burnt down and one truck badly damaged.

Skirmishes erupted on Sunday after a group from Ildamat ward allegedly forced itself into a sand mining area without consulting the people of Iloodokilani, who are the custodians.

Governor Lenku's call for a meeting in his office with the two warring groups from different wards aborted when Kajiado West MP George  Sunkuyia told his supporters to stay away.

Road transport between Kajiado and Maili 46 towns is cut off following skirmishes between the rivals fighting over sand mines around the Kenya Marble Quarries.

The road was closed on Wednesday and Thursday after three days of clashes between groups from Kajiado Central and Kajiado East subcounties.

Sunkuyia in whose constituency youths allegedly were beaten by their neighbours from Ildamat over sand told his supporters to boycott the governor's meeting.

“How can the governor purport to call for reconciliation meeting and yet those youth from Ildamat ward in Kajiado Central who beat and injured my people have not been arrested?” Sunkuyia asked.

The MP claimed there are no “lesser” Maasai people in Kajiado to warrant beating as police officers stand on the sidelines and watch without maintaining order.

He said those who were beaten and whose property was destroyed belong to the Iloodokilani community in Kajiado West and own the sites where sand is being harvested.

“We want to know why the police failed to arrests the inciters who commit crimes against innocent people," Sunkuyia said

Kajiado Central police commander Daudi Lornyokwe confirmed one man was injured and a sand truck destroyed by the marauding youth from Ildamat near Kajiado town. No arrests were made.

Lornyokwe said the government had suspended sand harvesting in the conflict area until the dispute is resolved.

On Wednesday and Thursday, public service vehicles plying the Kajiado town /KMQ/Maili 46 road were warned by the marauding youth against using the road.

"As a government, we closed all the sand mines in the area until the two groups come up with best practices of operation,” Lornyokwe told the Star on the phone.

He said deputy county commissioner Charles Wambugu stopped sand harvesting in the area on Monday after one man was injured in clashes on Sunday night.

The police have erected a roadblock at the turnoff to KMQ along the Kajiado/Namanga road to stop sand trucks from using the route and risking attacks.

Jane Sawe, a trader in Maili 46 town, said on the telephone all the PSVs on the Kajiado town route never left town after the owners were warned on Tuesday.

“We use the same vehicles to transport our shop wares from Kajiado town and the situation on the route is uncertain on Thursday," Sawe said.

Peter Malit, who also operates a retail shop, said he sent money for several bales of maize flour from Kajiado but he was told there were no vehicles for Maili 46 town.

STAR COMMUNITY POLICY AND PARTICIPATION GUIDELINES
by KURGAT MARINDANY Correspondent
sponsored by THE STAR KENYA None
Rift Valley
21 May 2020 - 22:00