• More than 10 people killed by hippos this year and hippo numbers increase. 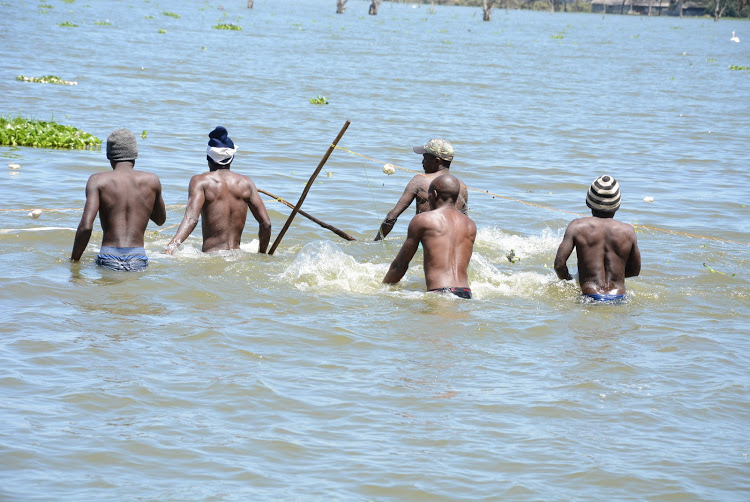 DANGEROUS: Illegal fishermen in Lake Naivasha lay their nets near shores where hippo attacks on the rise.
Image: GEORGE MURAGE

Hippo attacks in Lake Naivasha have been increasing in the past month following an influx of sacked flower farmworkers seeking to make a living as fishermen.

The third person in a week was killed by a hippo near Kihoto Estate while illegally fishing.

The man was dead on arrival at Naivasha subcounty hospital.

Early in the week, two fishermen were killed by hippos at Kasarani and Karagita beaches.

Chairman of Friends of Lake Naivasha Francis Muthui said the rising cases were worrying as at least three deaths are reported every month. Six attacks occurred in the past month, he said.

Muthui said most of those killed are foot-fishermen from neighbouring informal estates.

“We have lost another young man to an attack by a hippo and these cases are on the rise due to the high number of people involved in illegal fishing,” he said.

“We have formed a multi-agency security team to address the rising cases of illegal fishing,” he said.

Youths from Karagita Estate in Naivasha, meanwhile, won the first round in their battle with an investor over the opening of a blocked corridor leading to the lake. They used the corridor to reach the lake for fishing.

The investor agreed to open the corridor near the Sopa Lodge following three days of unrest in which several buses were damaged and transport halted.

Demonstrator Lucas Kiratu said the corridor was essential in the lives of poor residents. He said it had been used for years before it was blocked by the investor.

“We are grateful the corridor leading to the lake has been opened and we will push for other blocked access routes to be opened," he said.

Post a comment
WATCH: The latest videos from the Star
by GEORGE MURAGE CORRESPONDENT
Rift Valley
21 May 2020 - 22:00
Read The E-Paper