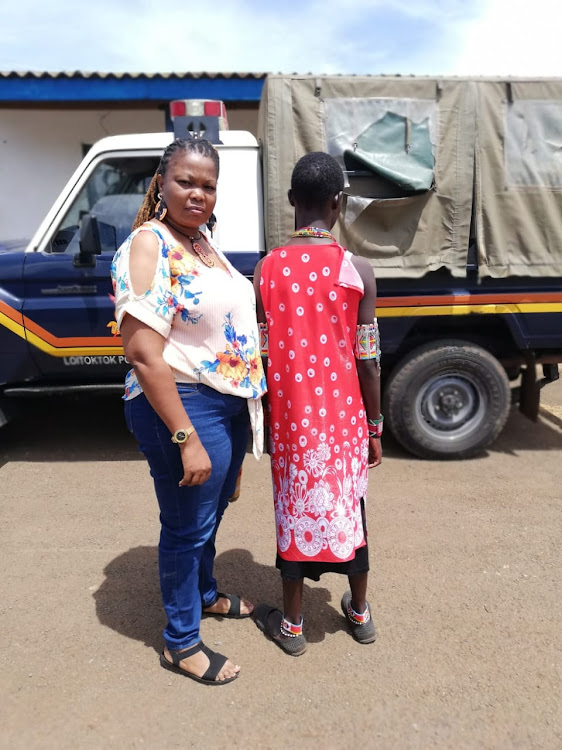 A 12-year-old girl in Kajiado can now breathe a sigh of relief after being rescued from a forced marriage of four years.

Grace (not her real name) from Lenkisin, Loitoktok subcounty, was forced by her father to marry a 37-year-old man in 2016. She was eight years old then and had undergone female genital mutilation.

She was rescued on Saturday by the area assistant county commissioner and the founder of Hope and Beyond Transitional Centre after they came to know about her ordeal.

Her husband and father were arrested and arraigned on Monday. They were charged with defilement and early marriage.

Upon investigation, police found out that the minor was registered through the office of Registrar Persons to acquire her national ID and issued with a waiting notification.

An unscrupulous officer at the Registrar of Persons office in Oloitoktok had started processing her ID to show that she was an adult.

The DCI in Kajiado are investigating the matter with a pending case in court  on  April 6.

Police officers and anti-FGM crusader Dorcas Parit stormed the home of the man and rescued the minor.

On the night of the rescue, the girl was asleep with her supposed husband and was taken to a nearby clinic for a medical check-up.

The doctor who examined her confirmed that she was defiled occasionally by the suspect, who is alleged to have been working as a security guard in Nairobi.

The scars on her face demonstrated the painful life Grace had been going through. Her parents forcibly took her back to her husband each time she escaped as they had already accepted her dowry.

The girl said she did not want to end up like her sisters who were married off at a tender age.

“My sisters, who are all young mothers, could not escape the plight of early marriage in our family and I have vowed to break that cycle,” Grace said.

She said she wanted to rejoin primary school and resume studies.

Her father who has five wives is alleged to have married off Grace's sisters the same way.

Parit, the founder of Hope and Beyond Transitional Rescue Centre, took the girl in after the successful rescue.

She said the fight against early marriage and FGM had met challenges since it is Maasai culture to cut daughters before handing them over for marriage.

Parit said the falsification and forging of birth certificates and ID cards was a new tactic to escape the law.

Cross-border FGM has also made the fight difficult since the girls are moved between Kenya and Tanzania, making tracing the perpetrators hard.

Many suspects involved in FGM or early marriage secure bail and are released back into the community. Parents of most victims prefer to settle cases out of court.

“The child is left to suffer in silence since these traditions do not work in favour of the victims, and they are subjected to the ordeals of early marriage and FGM in secret,” Parit said.

Chiefs have often been accused of supporting the practice by failing to arrest those involved and some of them even allow their daughters to undergo the cut, saying that it is their culture.

Lenkisin assistant county commissioner Aniel Kuria said the traditions and practices of the Maasai community pose a great challenge against achieving the anti-FGM mission in the area.

“The trend of marrying off young girls and female genital mutilation in Kajiado is on the rise, but we are doing everything to end it since it's illegal", he said.

Equality Now program officer Felister Gitonga said the NGO would bring together stakeholders to make sure Grace and other victims get justice.

Gitonga said some parents colluded with people who violate the rights of girls to try to beat the law by forging documents like birth certificates to get IDs.

She urged the government and policy-makers to develop and implement a comprehensive multi-sectoral approach to deal with the practices.

"We have to ensure that these policies that are existing around FGM and child marriage are well implemented and take care of our girls," she said.