High school transition now stand at 68 per cent as county top officials fail to account for 32 per cent.

• The poverty rate in Kajiado and Narok appears to have taken its toll on students from poor homes, according to Education CS. 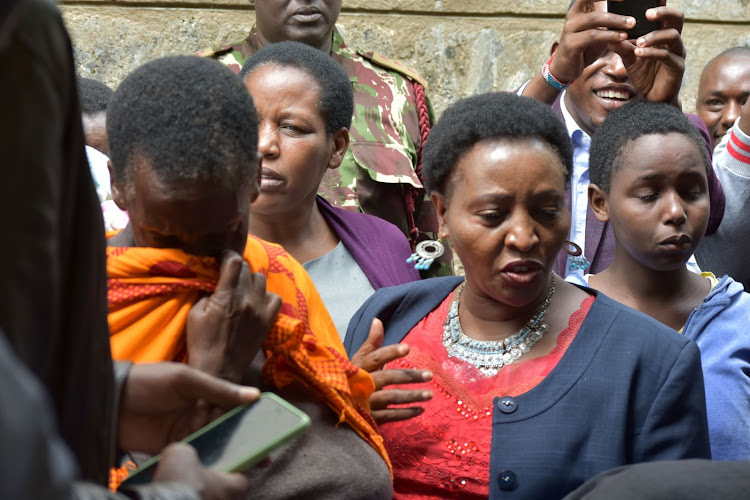 Form One girls shade tears uncontrollably in Kajiado town on Saturday as Education CS George Magoha visited their homes and took them to school.

The girls who had dashed their hopes of transitioning to secondary school had their dreams come true as Magoha went calling and ensured all went to the schools they had been called to.

Abigael Semeyian, 14, from Moipei Primary School was overwhelmed by the number of fuel-guzzling vehicles that stopped at her home in Ildamat at 11 am.

“I have never seen this before. I got scared as I thought they had come to arrest my poor mother for failing to take me to school. Tears just flowed down my chick as I waited to hear the last word from my mother,” said Semeyian after donning a new set of uniforms at Sajiloni Girls Secondary School.

At the school, her mother, Judith Kileteto, a single parent cried as she faced the sky thanking God for what she called a “miracle” that had just happened in the family.

She prayed in her Maasai dialect for close to 3 minutes as Magoha encouraged her to cry more so she can get relieved.

Beatrice Naserian, 14, was also overwhelmed when she had dressed up in a new pair of uniform. Her mother, Eunice Namunyak, a single parent, could not help her uncontrolled tears rolling down her chick.

The CS later moved to a Sajiloni village and picked Doris Yiamoi, 14, whose parents separated and both left their home when their daughter was 2 years old.

Her grandmother, Yiamoi Ndisha, 90, took care of her and along the way a Good Samaritan placed her at rescue centre at AIC Girls Primary School.

Doris got 260 marks but could join Ilbissil Girls Secondary School because of poverty that docked her grandmother’s home.

When Magoha came visiting, the elderly woman prayed for the Minister in Maasai language for saving her granddaughter from the suitors.

Earlier, on his way to Ilbissil, Magoha was stopped by a 13 year-boy, Daudi Tajeu who did his KCPE at Sinkiraine Primary School last year.

Tajeu said he scored 368 marks but her poor mother could not enable him to join Olkejuado High School in Kajiado town.

He said his father left home last year in September to go and look for a watchman job in Nairobi and never to return.

“He switched off his phone after leaving home. We do not know if he is alive because he has never called home ever since he left,” said Tajeu after Magoha took him to his dream school.

The minister also assisted three other girls he found at the gate of Ilbissil Girls Secondary School.

While talking to journalists later, Magoha said transition rates to secondary schools in Kajiado is at 68 per cent.

“We want all these children to go to secondary school. I am instructing Regional Director of Education, John Ololtuaa, to give me good numbers by Wednesday next week,” said the CS.

He said he does not understand why Kajiado and Narok counties are still below 70 per cent.

Magoha said the transition to secondary schools in Murang’ a is at 127 per cent, while in Nyeri it stands at 118 per cent.